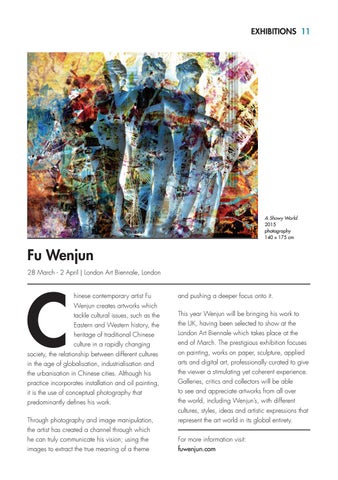 hinese contemporary artist Fu Wenjun creates artworks which tackle cultural issues, such as the Eastern and Western history, the heritage of traditional Chinese culture in a rapidly changing society, the relationship between different cultures in the age of globalisation, industrialisation and the urbanisation in Chinese cities. Although his practice incorporates installation and oil painting, it is the use of conceptual photography that predominantly defines his work. Through photography and image manipulation, the artist has created a channel through which he can truly communicate his vision; using the images to extract the true meaning of a theme

and pushing a deeper focus onto it. This year Wenjun will be bringing his work to the UK, having been selected to show at the London Art Biennale which takes place at the end of March. The prestigious exhibition focuses on painting, works on paper, sculpture, applied arts and digital art, professionally curated to give the viewer a stimulating yet coherent experience. Galleries, critics and collectors will be able to see and appreciate artworks from all over the world, including Wenjunâ&#x20AC;&#x2122;s, with different cultures, styles, ideas and artistic expressions that represent the art world in its global entirety. For more information visit: fuwenjun.com

The smallest of artworks can have the biggest impact, and in this issue we’ve featured a group of artists who are proving that bigger isn’t...

The smallest of artworks can have the biggest impact, and in this issue we’ve featured a group of artists who are proving that bigger isn’t...