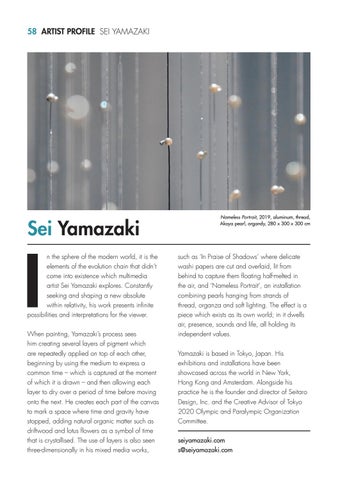 n the sphere of the modern world, it is the elements of the evolution chain that didn’t come into existence which multimedia artist Sei Yamazaki explores. Constantly seeking and shaping a new absolute within relativity, his work presents infinite possibilities and interpretations for the viewer. When painting, Yamazaki’s process sees him creating several layers of pigment which are repeatedly applied on top of each other, beginning by using the medium to express a common time – which is captured at the moment of which it is drawn – and then allowing each layer to dry over a period of time before moving onto the next. He creates each part of the canvas to mark a space where time and gravity have stopped, adding natural organic matter such as driftwood and lotus flowers as a symbol of time that is crystallised. The use of layers is also seen three-dimensionally in his mixed media works,

such as ‘In Praise of Shadows’ where delicate washi papers are cut and overlaid, lit from behind to capture them floating half-melted in the air, and ‘Nameless Portrait’, an installation combining pearls hanging from strands of thread, organza and soft lighting. The effect is a piece which exists as its own world; in it dwells air, presence, sounds and life, all holding its independent values. Yamazaki is based in Tokyo, Japan. His exhibitions and installations have been showcased across the world in New York, Hong Kong and Amsterdam. Alongside his practice he is the founder and director of Seitaro Design, Inc. and the Creative Advisor of Tokyo 2020 Olympic and Paralympic Organization Committee. seiyamazaki.com s@seiyamazaki.com