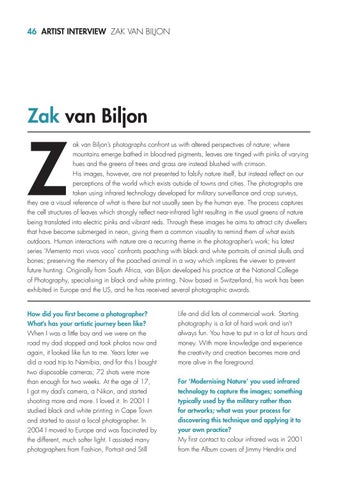 ak van Biljon’s photographs confront us with altered perspectives of nature; where mountains emerge bathed in blood-red pigments, leaves are tinged with pinks of varying hues and the greens of trees and grass are instead blushed with crimson. His images, however, are not presented to falsify nature itself, but instead reflect on our perceptions of the world which exists outside of towns and cities. The photographs are taken using infrared technology developed for military surveillance and crop surveys, they are a visual reference of what is there but not usually seen by the human eye. The process captures the cell structures of leaves which strongly reflect near-infrared light resulting in the usual greens of nature being translated into electric pinks and vibrant reds. Through these images he aims to attract city dwellers that have become submerged in neon, giving them a common visuality to remind them of what exists outdoors. Human interactions with nature are a recurring theme in the photographer’s work; his latest series ‘Memento mori vivos voco’ confronts poaching with black and white portraits of animal skulls and bones; preserving the memory of the poached animal in a way which implores the viewer to prevent future hunting. Originally from South Africa, van Biljon developed his practice at the National College of Photography, specialising in black and white printing. Now based in Switzerland, his work has been exhibited in Europe and the US, and he has received several photographic awards.

How did you first become a photographer? What’s has your artistic journey been like? When I was a little boy and we were on the road my dad stopped and took photos now and again, it looked like fun to me. Years later we did a road trip to Namibia, and for this I bought two disposable cameras; 72 shots were more than enough for two weeks. At the age of 17, I got my dad’s camera, a Nikon, and started shooting more and more. I loved it. In 2001 I studied black and white printing in Cape Town and started to assist a local photographer. In 2004 I moved to Europe and was fascinated by the different, much softer light. I assisted many photographers from Fashion, Portrait and Still

Life and did lots of commercial work. Starting photography is a lot of hard work and isn't always fun. You have to put in a lot of hours and money. With more knowledge and experience the creativity and creation becomes more and more alive in the foreground. For ‘Modernising Nature’ you used infrared technology to capture the images; something typically used by the military rather than for artworks; what was your process for discovering this technique and applying it to your own practice? My first contact to colour infrared was in 2001 from the Album covers of Jimmy Hendrix and