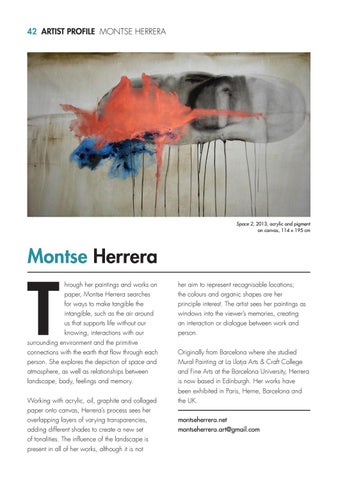 her aim to represent recognisable locations; the colours and organic shapes are her principle interest. The artist sees her paintings as windows into the viewerâ&#x20AC;&#x2122;s memories, creating an interaction or dialogue between work and person.

Working with acrylic, oil, graphite and collaged paper onto canvas, Herreraâ&#x20AC;&#x2122;s process sees her overlapping layers of varying transparencies, adding different shades to create a new set of tonalities. The influence of the landscape is present in all of her works, although it is not

hrough her paintings and works on paper, Montse Herrera searches for ways to make tangible the intangible, such as the air around us that supports life without our knowing, interactions with our surrounding environment and the primitive connections with the earth that flow through each person. She explores the depiction of space and atmosphere, as well as relationships between landscape, body, feelings and memory.

Originally from Barcelona where she studied Mural Painting at La Llotja Arts & Craft College and Fine Arts at the Barcelona University, Herrera is now based in Edinburgh. Her works have been exhibited in Paris, Herne, Barcelona and the UK.