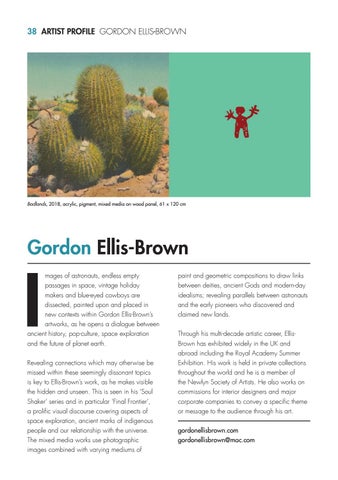 mages of astronauts, endless empty passages in space, vintage holiday makers and blue-eyed cowboys are dissected, painted upon and placed in new contexts within Gordon Ellis-Brown’s artworks, as he opens a dialogue between ancient history, pop-culture, space exploration and the future of planet earth. Revealing connections which may otherwise be missed within these seemingly dissonant topics is key to Ellis-Brown’s work, as he makes visible the hidden and unseen. This is seen in his 'Soul Shaker’ series and in particular ‘Final Frontier’, a prolific visual discourse covering aspects of space exploration, ancient marks of indigenous people and our relationship with the universe. The mixed media works use photographic images combined with varying mediums of

paint and geometric compositions to draw links between deities, ancient Gods and modern-day idealisms; revealing parallels between astronauts and the early pioneers who discovered and claimed new lands. Through his multi-decade artistic career, EllisBrown has exhibited widely in the UK and abroad including the Royal Academy Summer Exhibition. His work is held in private collections throughout the world and he is a member of the Newlyn Society of Artists. He also works on commissions for interior designers and major corporate companies to convey a specific theme or message to the audience through his art. gordonellisbrown.com gordonellisbrown@mac.com