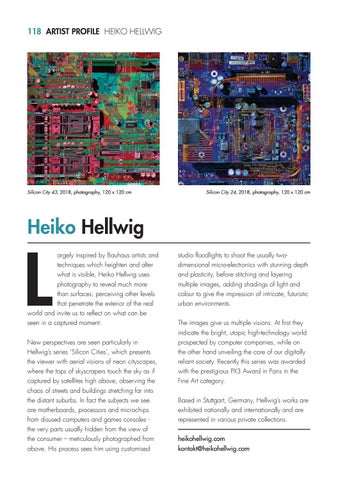 argely inspired by Bauhaus artists and techniques which heighten and alter what is visible, Heiko Hellwig uses photography to reveal much more than surfaces; perceiving other levels that penetrate the exterior of the real world and invite us to reflect on what can be seen in a captured moment. New perspectives are seen particularly in Hellwig’s series ‘Silicon Cities’, which presents the viewer with aerial visions of neon cityscapes, where the tops of skyscrapers touch the sky as if captured by satellites high above, observing the chaos of streets and buildings stretching far into the distant suburbs. In fact the subjects we see are motherboards, processors and microchips from disused computers and games consoles the very parts usually hidden from the view of the consumer – meticulously photographed from above. His process sees him using customised

studio floodlights to shoot the usually twodimensional micro-electronics with stunning depth and plasticity, before stitching and layering multiple images, adding shadings of light and colour to give the impression of intricate, futuristic urban environments. The images give us multiple visions. At first they indicate the bright, utopic high-technology world prospected by computer companies, while on the other hand unveiling the core of our digitally reliant society. Recently this series was awarded with the prestigious PX3 Award in Paris in the Fine Art category. Based in Stuttgart, Germany, Hellwig’s works are exhibited nationally and internationally and are represented in various private collections. heikohellwig.com kontakt@heikohellwig.com