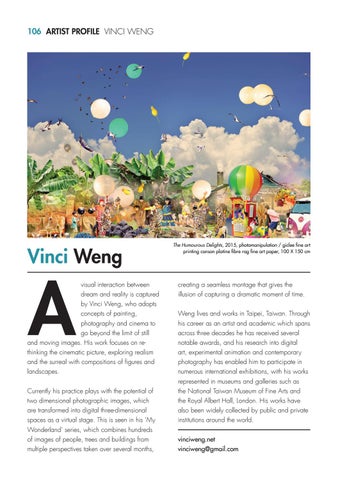 visual interaction between dream and reality is captured by Vinci Weng, who adopts concepts of painting, photography and cinema to go beyond the limit of still and moving images. His work focuses on rethinking the cinematic picture, exploring realism and the surreal with compositions of figures and landscapes. Currently his practice plays with the potential of two dimensional photographic images, which are transformed into digital three-dimensional spaces as a virtual stage. This is seen in his â&#x20AC;&#x2DC;My Wonderlandâ&#x20AC;&#x2122; series, which combines hundreds of images of people, trees and buildings from multiple perspectives taken over several months,

creating a seamless montage that gives the illusion of capturing a dramatic moment of time. Weng lives and works in Taipei, Taiwan. Through his career as an artist and academic which spans across three decades he has received several notable awards, and his research into digital art, experimental animation and contemporary photography has enabled him to participate in numerous international exhibitions, with his works represented in museums and galleries such as the National Taiwan Museum of Fine Arts and the Royal Albert Hall, London. His works have also been widely collected by public and private institutions around the world. vinciweng.net vinciweng@gmail.com