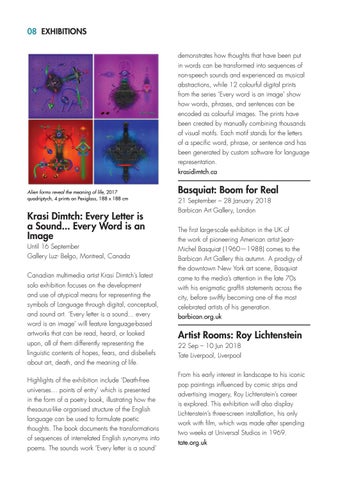 08 EXHIBITIONS demonstrates how thoughts that have been put in words can be transformed into sequences of non-speech sounds and experienced as musical abstractions, while 12 colourful digital prints from the series ‘Every word is an image’ show how words, phrases, and sentences can be encoded as colourful images. The prints have been created by manually combining thousands of visual motifs. Each motif stands for the letters of a specific word, phrase, or sentence and has been generated by custom software for language representation. krasidimtch.ca Alien forms reveal the meaning of life, 2017 quadriptych, 4 prints on Pexiglass, 188 x 188 cm

Krasi Dimtch: Every Letter is a Sound... Every Word is an Image Until 16 September Gallery Luz- Belgo, Montreal, Canada Canadian multimedia artist Krasi Dimtch’s latest solo exhibition focuses on the development and use of atypical means for representing the symbols of Language through digital, conceptual, and sound art. ‘Every letter is a sound... every word is an image’ will feature language-based artworks that can be read, heard, or looked upon, all of them differently representing the linguistic contents of hopes, fears, and disbeliefs about art, death, and the meaning of life. Highlights of the exhibition include ‘Death-free universes… points of entry’ which is presented in the form of a poetry book, illustrating how the thesaurus-like organised structure of the English language can be used to formulate poetic thoughts. The book documents the transformations of sequences of interrelated English synonyms into poems. The sounds work ‘Every letter is a sound’

Basquiat: Boom for Real 21 September – 28 January 2018 Barbican Art Gallery, London The first large-scale exhibition in the UK of the work of pioneering American artist JeanMichel Basquiat (1960—1988) comes to the Barbican Art Gallery this autumn. A prodigy of the downtown New York art scene, Basquiat came to the media’s attention in the late 70s with his enigmatic graffiti statements across the city, before swiftly becoming one of the most celebrated artists of his generation. barbican.org.uk

Artist Rooms: Roy Lichtenstein 22 Sep – 10 Jun 2018 Tate Liverpool, Liverpool From his early interest in landscape to his iconic pop paintings influenced by comic strips and advertising imagery, Roy Lichtenstein’s career is explored. This exhibition will also display Lichtenstein’s three-screen installation, his only work with film, which was made after spending two weeks at Universal Studios in 1969. tate.org.uk

Sometimes a certain place can take hold of us, stirring emotions as we connect with our surroundings. But how would you describe this place...

Sometimes a certain place can take hold of us, stirring emotions as we connect with our surroundings. But how would you describe this place...