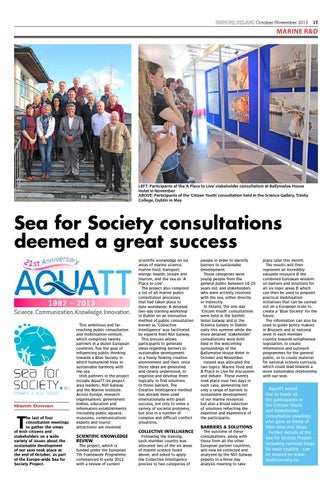 he last of four consultation meetings to gather the views of Irish citizens and stakeholders on a wide variety of issues about the sustainable development of our seas took place at the end of October, as part of the Europe-wide Sea for Society Project.

This ambitious and farreaching public consultation and mobilisation venture, which comprises twenty partners in a dozen European countries, has the goal of influencing public thinking towards a Blue Society in which humankind lives in sustainable harmony with the sea. Irish partners in the project include AquaTT (as project area leaders), NUI Galway and the Marine Institute. Across Europe, research organisations; government bodies; education and information establishments (including public aquaria, museums, communications experts and tourist attractions) are involved.

The project, which is funded under the European 7th Framework Programme, commenced in early 2012 with a review of current

scientific knowledge on six areas of marine science: marine food; transport; energy; health; leisure and tourism, and the sea as ‘A Place to Live’. The project also compiled a list of all marine public consultation processes that had taken place to date worldwide. A detailed two-day training workshop in Dublin on an innovative method of public consultation known as ‘Collective Intelligence’ was facilitated by experts from NUI Galway. This process allows participants to generate ideas regarding barriers to sustainable development in a freely flowing creative environment and then, once those ideas are generated and clearly understood, to organise and develop them logically to find solutions to those barriers. The Creative Intelligence method has already been used internationally with great success, not only to solve a variety of societal problems, but also in a number of complex and difficult conflict situations.

people in order to identify barriers to sustainable development. Those categories were young people from the general public between 18-25 years old, and stakeholders who were actively involved with the sea, either directly or indirectly. In Ireland, the one-day ‘Citizen Youth’ consultations were held in the Salthill Hotel Galway and in the Science Gallery in Dublin early this summer while the more detailed ‘stakeholder’ consultations were both held in the welcoming surroundings of the Ballymaloe House Hotel in October and November. Ireland was allocated the two topics: Marine Food and A Place to Live for discussion and debate. These events took place over two days in each case, generating not only a range of barriers to sustainable development of our marine resources but also a broad selection of solutions reflecting the expertise and experience of the participants.

The outcome of these consultations, along with those from all the other European partner countries, will now be collected and analysed by the NUI Galway experts in a three-day analysis meeting to take

Following the training, each member country was allocated two of the six areas of marine science listed above, and asked to apply the Collective Intelligence process to two categories of

place later this month. The results will then represent an incredibly valuable resource ― the combined European wisdom on barriers and solutions for all six topic areas ― which can then be used to pinpoint practical mobilisation initiatives that can be carried out on a European scale to create a ‘Blue Society’ for the future. The information can also be used to guide policy-makers in Brussels and at national level in each member country towards enlightened legislation; to create information and outreach programmes for the general public, or to create material for national schools curricula, which could lead towards a more sustainable relationship with our seas.

AquaTT would like to thank all the participants in the Citizen/Youth and Stakeholder consultation meetings who gave so freely of their time and ideas. Further details of the Sea for Society Project including national blogs for each country - can be viewed on www. seaforsociety.eu.