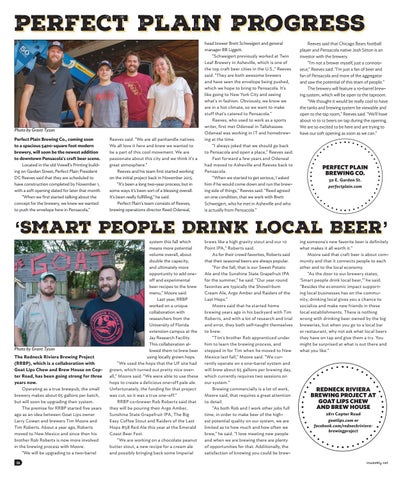 Perfect Plain Brewing Co., coming soon to a spacious 5400-square foot modern brewery, will soon be the newest addition to downtown Pensacola&#39;s craft beer scene. Located in the old Vowell&#39;s Printing building on Garden Street, Perfect Plain President DC Reeves said that they are scheduled to have construction completed by November 1, with a soft opening slated for later that month. &quot;When we first started talking about the concept for the brewery, we knew we wanted to push the envelope here in Pensacola,&quot;

Reeves said. &quot;We are all panhandle natives. We all love it here and knew we wanted to be a part of this cool movement. We are passionate about this city and we think it&#39;s a great atmosphere.&quot; Reeves and his team first started working on the initial project back in November 2015. &quot;It&#39;s been a long two-year process, but in some ways it&#39;s been sort of a blessing overall. It&#39;s been really fulfilling,&quot; he said. Perfect Plain&#39;s team consists of Reeves, brewing operations director Reed Odeneal,

head brewer Brett Schweigert and general manager BB Liggett. &quot;Schweigert previously worked at Twin Leaf Brewery in Asheville, which is one of the top craft beer cities in the U.S.,&quot; Reeves said. &quot;They are both awesome brewers and have seen the envelope being pushed, which we hope to bring to Pensacola. It&#39;s like going to New York City and seeing what&#39;s in fashion. Obviously, we know we are in a hot climate, so we want to make stuff that&#39;s catered to Pensacola.&quot; Reeves, who used to work as a sports writer, first met Odeneal in Tallahassee. Odeneal was working in IT and homebrewing at the time. &quot;I always joked that we should go back to Pensacola and open a place,&quot; Reeves said. Fast forward a few years and Odeneal had moved to Asheville and Reeves back to Pensacola. &quot;When we started to get serious, I asked him if he would come down and run the brewing side of things,&quot; Reeves said. &quot;Reed agreed on one condition, that we work with Brett Schweigert, who he met in Asheville and who is actually from Pensacola.&quot;

system this fall which means more potential volume overall, about double the capacity, and ultimately more opportunity to add oneoff and experimental beer recipes to the brew menu,&quot; Moore said. Last year, RRBP worked on a unique collaboration with researchers from the University of Florida extension campus at the Jay Research Facility. This collaboration allowed them to brew beer using locally grown hops. &quot;We used the hops that the UF site had grown, which turned out pretty nice overall,&quot; Moore said. &quot;We were able to use these hops to create a delicious one-off pale ale. Unfortunately, the funding for that project was cut, so it was a true one-off.&quot; RRBP co-brewer Rob Roberts said that they will be pouring their Argo Amber, Sunshine State Grapefruit IPA, The Big Easy Coffee Stout and Raiders of the Last Hops #58 Red Ale this year at the Emerald Coast Beer Fest. &quot;We are working on a chocolate peanut butter stout, a new recipe for a cream ale and possibly bringing back some Imperial

brews like a high gravity stout and our 10 Point IPA,&quot; Roberts said. As for their crowd favorites, Roberts said that their seasonal beers are always popular. &quot;For the fall, that is our Sweet Potato Ale and the Sunshine State Grapefruit IPA for the summer,&quot; he said. &quot;Our year round favorites are typically the Shovel-bum Cream Ale, Argo Amber and Raiders of the Last Hops.&quot; Moore said that he started home brewing years ago in his backyard with Tim Roberts, and with a lot of research and trial and error, they both self-taught themselves to brew. &quot;Tim&#39;s brother Rob apprenticed under him to learn the brewing process, and stepped in for Tim when he moved to New Mexico last fall,&quot; Moore said. &quot;We currently operate on a one-barrel system and will brew about 65 gallons per brewing day, which currently requires two sessions on our system.&quot; Brewing commercially is a lot of work, Moore said, that requires a great attention to detail. &quot;As both Rob and I work other jobs full time, in order to make beer of the highest potential quality on our system, we are limited as to how much and how often we brew,&quot; he said. &quot;I love meeting new people and when we are brewing there are plenty of opportunities for that. Additionally, the satisfaction of knowing you could be brew-

The Redneck Riviera Brewing Project (RRBP), which is a collaboration with Goat Lips Chew and Brew House on Copter Road, has been going strong for three years now. Operating as a true brewpub, the small brewery makes about 65 gallons per batch, but will soon be upgrading their system. The premise for RRBP started five years ago as an idea between Goat Lips owner Larry Cowan and brewers Tim Moore and Tim Roberts. About a year ago, Roberts moved to New Mexico and since then his brother Rob Roberts is now more involved in the brewing process with Moore. &quot;We will be upgrading to a two-barrel 616 1

Reeves said that Chicago Bears football player and Pensacola native Josh Sitton is an investor with the brewery. &quot;I&#39;m not a brewer myself, just a connoisseur,&quot; Reeves said. &quot;I&#39;m just a fan of beer and fan of Pensacola and more of the aggregator and saw the potential of this team of people.&quot; The brewery will feature a 10-barrel brewing system, which will be open to the taproom. &quot;We thought it would be really cool to have the tanks and brewing system be viewable and open to the tap room,&quot; Reeves said. &quot;We&#39;ll have about 10 to 12 beers on tap during the opening. We are so excited to be here and are trying to have our soft opening as soon as we can.&quot;

ing someone&#39;s new favorite beer is definitely what makes it all worth it.&quot; Moore said that craft beer is about community and that it connects people to each other and to the local economy. &quot;As the door to our brewery states, â&amp;#x20AC;&amp;#x2DC;Smart people drink local beer,&#39;&quot; he said. &quot;Besides the economic impact supporting local businesses has on the community, drinking local gives you a chance to socialize and make new friends in these local establishments. There is nothing wrong with drinking beer owned by the big breweries, but when you go to a local bar or restaurant, why not ask what local beers they have on tap and give them a try. You might be surprised at what is out there and what you like.&quot;