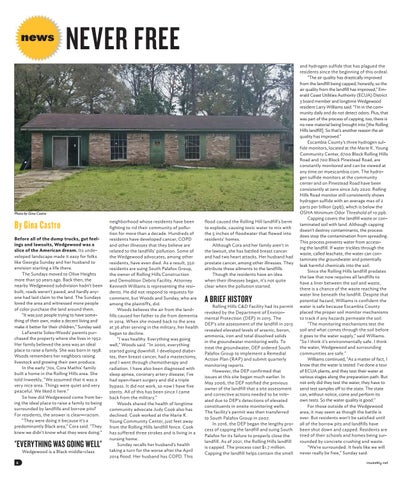 By Gina Castro Before all of the dump trucks, gut feelings and lawsuits, Wedgewood was a slice of the American dream. Its undeveloped landscape made it easy for folks like Georgia Sunday and her husband to envision starting a life there. The Sundays moved to Olive Heights more than 50 years ago. Back then, the nearby Wedgewood subdivision hadn&#39;t been built, roads weren&#39;t paved, and hardly anyone had laid claim to the land. The Sundays loved the area and witnessed more people of color purchase the land around them. &quot;It was just people trying to have something of their own, make a decent living and make it better for their children,&quot; Sunday said. LaFanette Soles-Woods&#39; parents purchased the property where she lives in 1952. Her family believed the area was an ideal place to raise a family. She was born in 1958. Woods remembers her neighbors raising livestock and growing their own produce. In the early &#39;70s, Cora Mathis&#39; family built a home in the Rolling Hills area. She told Inweekly, &quot;We assumed that it was a very nice area. Things were quiet and very peaceful. We liked it here.&quot; So how did Wedgewood come from being the ideal place to raise a family to being surrounded by landfills and borrow pits? For residents, the answer is clear—racism. &quot;They were doing it because it&#39;s a predominantly Black area,&quot; Cora said. &quot;They knew we didn&#39;t know what they were doing.&quot;

neighborhood whose residents have been fighting to rid their community of pollution for more than a decade. Hundreds of residents have developed cancer, COPD and other illnesses that they believe are related to the landfills&#39; pollution. Some of the Wedgewood advocates, among other residents, have even died. As a result, 350 residents are suing South Palafox Group, the owner of Rolling Hills Construction and Demolition Debris Facility. Attorney Kenneth Williams is representing the residents. He did not respond to requests for comment, but Woods and Sunday, who are among the plaintiffs, did. Woods believes the air from the landfills caused her father to die from dementia in 2014. When she moved back to the area at 36 after serving in the military, her health began to decline. &quot;I was healthy. Everything was going well,&quot; Woods said. &quot;In 2000, everything started going downhill. I developed diabetes, then breast cancer, had a mastectomy, and I went through chemotherapy and radiation. I have also been diagnosed with sleep apnea, coronary artery disease; I&#39;ve had open-heart surgery and did a triple bypass. It did not work, so now I have five stents. All of this has been since I came back from the military.&quot; Woods shared the health of longtime community advocate Judy Cook also has declined. Cook worked at the Marie K. Young Community Center, just feet away from the Rolling Hills landfill fence. Cook has suffered three strokes and is living in a nursing home. Sunday recalls her husband&#39;s health taking a turn for the worse after the April 2014 flood. Her husband has COPD. This

flood caused the Rolling Hill landfill&#39;s berm to explode, causing toxic water to mix with the 5 inches of floodwater that flowed into residents&#39; homes. Although Cora and her family aren&#39;t in the lawsuit, she has battled breast cancer and had two heart attacks. Her husband had prostate cancer, among other illnesses. They attribute these ailments to the landfills. Though the residents have an idea when their illnesses began, it&#39;s not quite clear when the pollution started.

Rolling Hills C&amp;D Facility had its permit revoked by the Department of Environmental Protection (DEP) in 2015. The DEP&#39;s site assessment of the landfill in 2013 revealed elevated levels of arsenic, boron, ammonia, iron and total dissolved solids in the groundwater monitoring wells. To treat the groundwater, DEP ordered South Palafox Group to implement a Remedial Action Plan (RAP) and submit quarterly monitoring reports. However, the DEP confirmed that issues at this site began much earlier. In May 2006, the DEP notified the previous owner of the landfill that a site assessment and corrective actions needed to be initiated due to DEP&#39;s detections of elevated constituents in onsite monitoring wells. The facility&#39;s permit was then transferred to South Palafox Group in 2007. In 2016, the DEP began the lengthy process of capping the landfill and suing South Palafox for its failure to properly close the landfill. As of 2021, the Rolling Hills landfill is capped. The process cost $1.7 million. Capping the landfill helps contain the smell

and hydrogen sulfide that has plagued the residents since the beginning of this ordeal. &quot;The air quality has drastically improved from the landfill being capped, honestly, so the air quality from the landfill has improved,&quot; Emerald Coast Utilities Authority (ECUA) District 3 board member and longtime Wedgewood resident Larry Williams said. &quot;I&#39;m in the community daily and do not detect odors. Plus, that was part of the process of capping, too, there is no new material being brought into [the Rolling Hills landfill]. So that&#39;s another reason the air quality has improved.&quot; Escambia County&#39;s three hydrogen sulfide monitors, located at the Marie K. Young Community Center, 6700 Block Rolling Hills Road and 700 Block Pinestead Road, are constantly monitored and can be viewed at any time on myescambia.com. The hydrogen sulfide monitors at the community center and on Pinestead Road have been consistently at zero since July 2020. Rolling Hills Road monitor still consistently shows hydrogen sulfide with an average max of 2 parts per billion (ppb), which is below the OSHA Minimum Odor Threshold of 10 ppb. Capping covers the landfill waste or contaminated soil with land. Although capping doesn&#39;t destroy contaminants, the process does stop the contamination from spreading. This process prevents water from accessing the landfill. If water trickles through the waste, called leachate, the water can contaminate the groundwater and potentially leak harmful chemicals into the soil. Since the Rolling Hills landfill predates the law that now requires all landfills to have a liner between the soil and waste, there is a chance of the waste reaching the water line beneath the landfill. Despite that potential hazard, Williams is confident the water is safe because Escambia County placed the proper soil monitor mechanisms to track if any hazards permeate the soil. &quot;The monitoring mechanisms test the soil and what comes through the soil before it goes to the water supply,&quot; said Williams. &quot;So I think it&#39;s environmentally safe. I think the water, Wedgewood and surrounding communities are safe.&quot; Williams continued, &quot;As a matter of fact, I know that the water is tested. I&#39;ve done a tour of ECUA plants, and they test their water at various stages along the preparation path. But not only did they test the water, they have to send test samples off to the state. The state can, without notice, come and perform its own tests. So the water quality is good.&quot; For those outside of the Wedgewood area, it may seem as though the battle is over. But residents won&#39;t be satisfied until all of the borrow pits and landfills have been shut down and capped. Residents are tired of their schools and homes being surrounded by concrete crushing and waste. &quot;We&#39;re surrounded. It feels like we will never really be free,&quot; Sunday said. inweekly.net