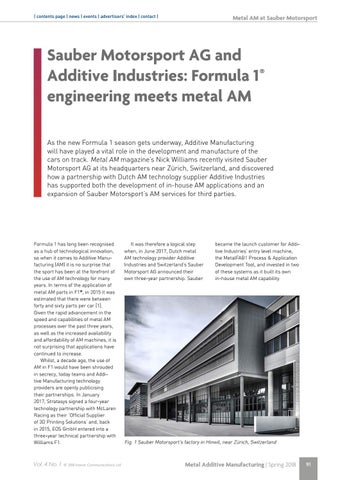 Metal AM at Sauber Motorsport

Sauber Motorsport AG and Additive Industries: Formula 1 ® engineering meets metal AM As the new Formula 1 season gets underway, Additive Manufacturing will have played a vital role in the development and manufacture of the cars on track. Metal AM magazine’s Nick Williams recently visited Sauber Motorsport AG at its headquarters near Zürich, Switzerland, and discovered how a partnership with Dutch AM technology supplier Additive Industries has supported both the development of in-house AM applications and an expansion of Sauber Motorsport’s AM services for third parties.

Formula 1 has long been recognised as a hub of technological innovation, so when it comes to Additive Manufacturing (AM) it is no surprise that the sport has been at the forefront of the use of AM technology for many years. In terms of the application of metal AM parts in F1®, in 2015 it was estimated that there were between forty and sixty parts per car [1]. Given the rapid advancement in the speed and capabilities of metal AM processes over the past three years, as well as the increased availability and affordability of AM machines, it is not surprising that applications have continued to increase. Whilst, a decade ago, the use of AM in F1 would have been shrouded in secrecy, today teams and Additive Manufacturing technology providers are openly publicising their partnerships. In January 2017, Stratasys signed a four-year technology partnership with McLaren Racing as their ‘Official Supplier of 3D Printing Solutions’ and, back in 2015, EOS GmbH entered into a three-year technical partnership with Williams F1.

It was therefore a logical step when, in June 2017, Dutch metal AM technology provider Additive Industries and Switzerland’s Sauber Motorsport AG announced their own three-year partnership. Sauber

became the launch customer for Additive Industries’ entry level machine, the MetalFAB1 Process &amp; Application Development Tool, and invested in two of these systems as it built its own in-house metal AM capability. 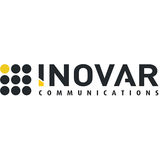