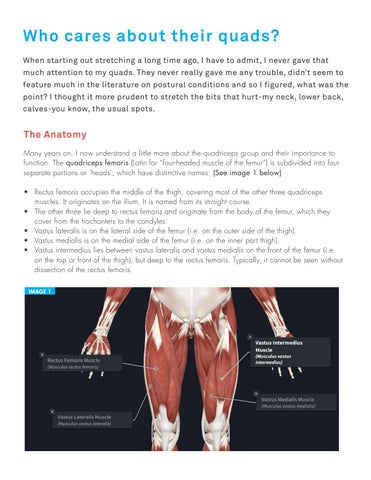 Who cares about their quads? When starting out stretching a long time ago, I have to admit, I never gave that much attention to my quads. They never really gave me any trouble, didn’t seem to feature much in the literature on postural conditions and so I figured, what was the point? I thought it more prudent to stretch the bits that hurt-my neck, lower back, calves-you know, the usual spots.

The Anatomy Many years on, I now understand a little more about the quadriceps group and their importance to function. The quadriceps femoris (Latin for “four-headed muscle of the femur”) is subdivided into four separate portions or ‘heads’, which have distinctive names: (See image 1 below) • Rectus femoris occupies the middle of the thigh, covering most of the other three quadriceps muscles. It originates on the ilium. It is named from its straight course. • The other three lie deep to rectus femoris and originate from the body of the femur, which they cover from the trochanters to the condyles: • Vastus lateralis is on the lateral side of the femur (i.e. on the outer side of the thigh). • Vastus medialis is on the medial side of the femur (i.e. on the inner part thigh). • Vastus intermedius lies between vastus lateralis and vastus medialis on the front of the femur (i.e. on the top or front of the thigh), but deep to the rectus femoris. Typically, it cannot be seen without dissection of the rectus femoris. IMAGE 1

Of the group, the rectus femoris is probably most influential posturally because unlike the other three, it crosses the hip joint and attaches to the pelvis itself and can affect its position (see image 2). If tight, it can cause an anterior tilt, with repercussions throughout the spine. A tight recuts femoris pulls downward directly on the pelvis (see image 3), and increases the lumber curve, or lordosis. As well as creating strong shear forces through the lumber spine, over time, a strong anterior pelvic rotation can create an increased thoracic curvature in the opposite direction as the body attempts to balance itself in the gravitational field. A further adaptation is a forward head posture with extension at the top two joints of the spine. This is to enable you to see straight head, and is described by Leon Chaitow as the â&#x20AC;&#x153;crossed syndromeâ&#x20AC;?. (See image 4)

The other important aspect of the quadriceps group that we hear a lot about is a portion of the Vastus Medialis, called the Vastus Medialis Oblique, or VMO. See image 5. The VMO features particularly during the final 20 degrees of knee extension and its function is to counterbalance the pull of the vastus lateralis on the patella tendon. If both are well balanced, their net effect is a smooth running patella tendon that glides comfortably in the patellofemoral groove. Research during the last 15 years has demonstrated that the VMO will atrophy in response to knee joint injury or surgery and the sliding motion of the patella will be effected. (The reason proposed for this atrophy is that the VMO fibers are largely type one, or tonic, slow twitch fibers that rely on constant low level stimulation for their health.) Rehab has focused on addressing any imbalance that may arise, and ensuring that the VMO is active. (See Hodges P. Therapeutic exercise for spinal segmental stabilization in low back pain. pp 88)

How can Pilates help? Many exercises in the Pilates repertoire can directly benefit the VMO. Lying leg extension work on the Universal Reformer can be focused very specifically on the final 20 degrees of motion. See Image 6. Paradoxically, light resistance and slow-moving extension can also be an important feature of training. The VMO is said to adapt best to lower intensities of training stimulus (because of their slow twitch fiber makeup) which the Pilates reformer is very easily able to provide. In addition, co-contraction of the hamstring group is also suggested to support knee structure, and many Pilates instructors are well trained to emphasize this skill.

Imbalances and stretching Combining resistance training on the Pilates reformer with therapeutic muscle stretching is the most effective long term strategy in addressing muscle imbalances within the Vastus or quadriceps group. A stronger vastus lateralis, which may weaken the VMO and pull the patella tendon laterally, can be very effectively stretched using the StretchFit combination station.

The knee is flexed with lateral flexion of the trunk. Generally, when the trunk is laterally flexed, the thigh abducts, the hip flexes and the stretch is lost. The combination stations locks it in position. See images 7 a, b & c.

Image 7a. Flex the knee and rotate pelvis posteriorly.

Image 7b. Lock the knee in position with bottom bar.

Image 7c. To affect the vastus lateralis, laterally flex the trunk away from the leg you are stretching.

Similarly, a stronger vastus medialis, and some adductors too, can be stretched by performing knee flexion combined with a little abduction and external rotation of the thigh. See Image 8.

Image 8. Explore different position of the femur and pelvis to find the feelings.

Stretching RECTUS FEMORIS To stretch Rectus Femoris requires particular attention at the pelvis because it crosses both the hip and knee joint. So, you need to extend the hip and flex the knee in order to elongate it. One way to do this is to lunge and then take the foot toward the bottom. See Image 9. IMAGE 9

On the combination station, we start with the knee flexed and locked in position and then tilt the pelvis posteriorly. To increase the stretch, we take the pelvis back toward the foot. See image 10.

In Conclusion Don’t do as I did, and ignore the vastus group, as if they are disconnected from the whole of the body. As with any muscle group, this is never the case. We understand now, more than ever, that everything is interconnected. As we have seen your quads could be affecting biomechanical function elsewhere in the body like the lower back or neck. If you don’t suspect your quads are particularly tight, stretch prophylactically- an ounce of prevention is worth a pound of cure!

To explore this material in more detail, my book “Stretching on the Pilates reformer, essential cues and images” on Amazon books is recommended.

Who cares about their quads?

Who cares about their quads?