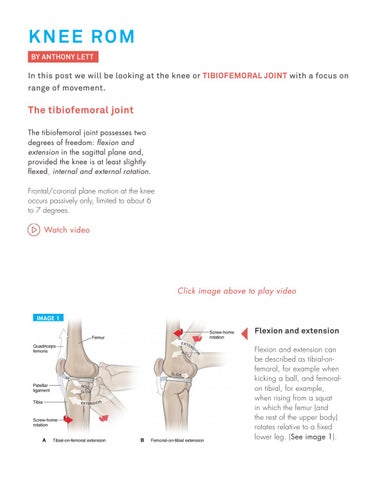 In this post we will be looking at the knee or TIBIOFEMORAL JOINT with a focus on range of movement.

Flexion and Extension Flexion and extension at the knee occur about a medial-lateral axis of rotation. Range of motion varies with age and gender, but in general the healthy knee moves from 130 to 150 degrees of flexion to about 5 to 10 degrees beyond the 0-degree (straight) position. Limiting factors for the 5 to 10 degrees of extension are: Posterior portion of the joint capsule, Ligaments: cruciates, medial and lateral and oblique posterior, Hamstrings when the hip is in marked flexion, inflammation of the joint, bone mass. Limiting factors for flexion include: posterior aspect of thigh and calf, or heel and buttocks apposition, quadriceps and vasti muscles.

Axial rotation of the knee provides an important functional element of mobility to the lower extremity as a whole. Rotation of the knee is essential to a normal gait pattern and is fundamental to running and rapidly changing directions, as well as many sporting activities and dance.

Testing flexion ROM at the knee/hip joint If using a goniometer, the axis should be paced on the greater trochanter with the stationary arm along the side of the trunk and the moveable arm along the outer thigh.

The reading of 0 degrees refers to the position when the leg is lying flat on the floor, and 90 degrees when the leg is going straight up toward the ceiling. See Image two above. The pelvis must be maintained in a neutral position. While 90 degrees is considered normal range for the general population, the average for dancers for example was shown to be 150 degrees. (Clippinger 1991) Whilst 90 degrees may be regarded as normal, it is my experience that this is not often seen in the general population. For more information on the importance of hamstring flexibility in relation to movement and back pain, please read the article attached. IMAGE 3

Medial and lateral rotation of the tibia can be assessed with the knee in 90 degrees of flexion. Although not covered in the Level one course and ROMA, teachers can assess the range with both active and passive testing. Place a small red pen mark on the tibial tuberosity and test for approximately 15 degrees of internal rotation and 30 degrees of external rotation as â&#x20AC;&#x153;normalâ&#x20AC;? passive range. If internal rotation is limited, it may be because of tightness in the biceps femoris and the following test (for confirmation) and stretch is recommended. See Image 3.

Ensuring that the pelvis remains neutral, the hip is both flexed and adducted. This will stretch the lateral hamstrings - the short and long head of biceps femoris and possibly the piriformis muscle also. (Note that “normal” values for adduction are said to be around 30 degrees. However, this test “Ober” test is not performed with the leg in flexion and is normally used to test tightness in the abductors and ITB.) A subject that cannot perform almost any adduction with the leg in flexion would score a 1.A subject that can achieve around the same as in the image above (around 30 degrees of adduction and 90 degrees of flexion) would score a two. On the ladder, the stretch and test can be performed by ensuring the both feet are in the same plane before flexing at the hip and lowering the trunk. A subject that cannot perform at least 80 degrees of hip flexion with the spine held neutral and the feet aligned would score a one. External rotation is produced by the short and long head of the biceps femoris. See videos above. Muscles limiting this movement can include medial hamstrings- semitendinosus, semimembranosus as well as gracilis and sartorius. Test the general ROM of abduction with legs straight, because gracilis and sartorius both cross the knee joint. See image four. Limited abduction may also result in internal rotation of the knee. IMAGE 4

Note that these tests are unconventional and seldom seen. However, as noted above, agility and movement of the knee in external and internal rotation is important, and a Stretch Therapist needs to be able to assess and treat stiffness in these movements. Just yesterday, a report by Sports Medicine Australia noted that knee injuries sustained during sporting activity could be reduced by a whopping 50 to 80% if competitors increased agility at the knee joint.

â&#x20AC;&#x153;Normalâ&#x20AC;? range of motion of the quadriceps is around 135 degrees. See images 7 & 8. Tight quadriceps my increase the risk of patellofemoral problems in particular, so it is important that adequate flexibility is achieved and maintained. For more information on the relationship between the rectus femoris and pelvic alignment, see the article attached. To effectively stretch the Vasti component of the quadriceps the knee must be brought toward full flexion. The position of the pelvis is irrelevant for testing since the Vasti muscles do not cross the hip joint. See image 6.

Quad test In the ROMA test, the heel is brought toward the bottom while lying prone. It is important to realize that due to knee joint structure when the knee fully flexes the shaft of the distal tibia should angle medially relative to the shaft of the femur. Hence, this normal motion should be allowed and twisting of the tibia should be avoided. IMAGE 9

Rectus femoris test The lunge test places almost all clients in a position of approximately 10 degrees of posterior pelvic tilt. Keep in mind that in some anatomy texts, this is regarded as â&#x20AC;&#x153;normalâ&#x20AC;? range of hip extension. As a result, clients may experience a stretch in rectus femoris as soon as the rear foot is lifted from the floor because it is being stretched over both the hip and knee joint. Ensure that the weight is on the thigh and above the patella.

With very stiff clients who cannot get into enough hip extension to avoid bearing weight onto the patella, alternative positions including prone, side lying and supine stretches will be demonstrated in class. An example can be seen in image ten although the pelvis is not well stabilised. Note image 9, (Rec fem test) the rectus femoris crosses both the hip and knee joint, and the pelvis is in posterior tilt.

Test Your Knowledge Finally, test your knowledge by answering the question below (see image 11 below).

Thanks Folks! Enjoy, and please email for further information.