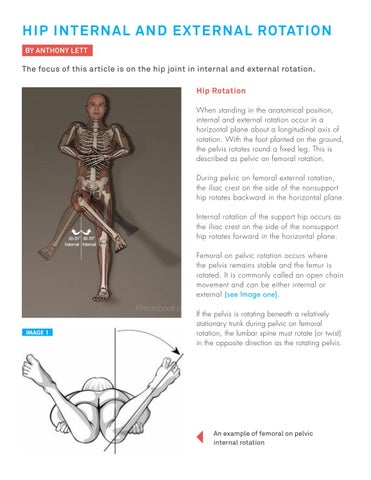 If the pelvis is rotating beneath a relatively stationary trunk during pelvic on femoral rotation, the lumbar spine must rotate (or twist) in the opposite direction as the rotating pelvis.

An example of femoral on pelvic internal rotation

External Rotation Normal range is often given as 45 degrees, although there is large variation which will be discussed in class. Note the image at the top of the page which gives normal as 20 to 35 degrees. Limiting factors include: • The anterior portion of the joint capsule. • The iliofemoral and pubofemoral ligaments. • The internal rotator muscles. There are no primary internal rotator muscles in the anatomical position, however the muscles below all contribute to internal rotation. Each action assumes a muscle contraction that originates from the anatomic position. Several of these muscles may have a different action (in particular a stronger internal rotation torque) when they contract from a position other than the anatomic position. • Gluteus minimus (anterior fibers), Gluteus medius (anterior fibers), Tensor fasciae latae, Adductor longus, Adductor brevis, Pectineus.

Interestingly… An “ideal” primary internal rotator muscle of the hip would theoretically be oriented in the horizontal plane during standing, at some linear distance from the longitudinal or vertical axis of rotation at the hip. From the anatomic position, however, there are no primary internal rotators because no muscle is oriented even close to the horizontal plane. Several secondary internal rotators exist and are listed above. With the hip approaching 90 degrees of flexion, the internal rotation torque potential of the internal rotator muscles dramatically increases. This becomes clear with the help of a skeleton model and piece of string to mimic the line of force of muscles, such as the anterior fibers of the gluteus minimus or gluteus medius. Flexing the hip close to 90 degrees reorients the line of force of these muscles from nearly parallel to nearly perpendicular to the longitudinal axis of rotation at the hip.

This occurs because the longitudinal axis of rotation remains parallel with the shaft of the repositioned femur. Delp1 and coworkers have reported that the internal rotation moment arm of the anterior part of the gluteus medius, for example, increases eightfold between 0 and 90 degrees of flexion. Even some external rotator muscles (such as the piriformis,

anterior fibers of the gluteus maximus, and posterior fibers of the gluteus minimus) switch actions and become internal rotators beyond about 90 degrees of flexion. These changes in muscle action help explain why maximal-effort internal rotation torque in healthy persons has been shown to be about 50% greater with the hip flexed rather than extended.2

Biomechanics of the Adductor Muscles as Internal Rotators of the Hip In general, most of the adductor muscles are said to be capable of producing a modest internal rotation torque at the hip when the body is in or near the anatomic position.3 This action, however, may be difficult to reconcile considering that most adductors attach to the posterior side of the femur along the linea aspera. With normal anatomy of the hip, a shortening of these muscles would appear to rotate the femur externally instead of internally. Indeed, Dr Gerry, a professor of Medical Anatomy agues against this possibility when I questioned him.

Neumann, Donald A. in the Kinesiology of the Musculoskeletal System argues the following. â&#x20AC;&#x153;What must be considered, however, is the effect that the natural anterior bowing of the femoral shaft has on the line of force of the muscles. Bowing places much of the linea aspera anterior to the longitudinal axis of rotation at the hip. The horizontal force component of an adductor muscle, such as the adductor longus, lies anterior to the axis of rotation. Force from this muscle therefore acts with a moment arm to produce internal rotation.â&#x20AC;?

The ROMA Test IMAGE 3A

The ROMA test varies from traditional testing procedures like the ones above, image three A and B. They are usually performed lying pone or supine. Why don’t we use them? Because they yield imprecise results. This will be discussed in greater detail in class, but essentially: External rotation as a test for “internal rotator muscles” doesn’t test anything in particular, as we have seen above. Recall that there are no primary internal rotators because no muscle is oriented even close to the horizontal plane. Although the Gluteus minimus (anterior fibers), Gluteus medius (anterior fibers), Tensor fasciae latae do internally rotate the femur, there are more effective tests for these, and tightness in them will show up in these alternative tests. An example is in the hip flexor tests.

Unlike the internal rotators, the line of force of these muscles is oriented primarily in the horizontal plane. This orientation is optimal for the production of external rotation torque. In the anatomic position, muscles considered as secondary external rotators are the posterior fibers of the gluteus medius and minimus, obturator externus, sartorius, and long head of the biceps femoris. The obturator externus is considered a secondary rotator because in the anatomic position its line of force lies only a few millimeters posterior to the longitudinal axis of rotation.

The lower fibers of gluteus maximus are probably stretched to a greater extent in the ROMA test in image 7. In a stiff client, this action will be enough to elicit a stretch. If not, leaning toward the foot takes the origins of the deep rotators on the sacrum further from their insertions on the trochanter. Lying supine and internally rotating the femur with the thigh flexed at 90 degrees is not a useful test generally for testing the length of the external hip rotator muscles. See image 3A. (Image 3B may be marginally better.) This is perhaps because as noted above some external rotator muscles such as the piriformis, anterior fibers of the gluteus maximus, and posterior fibers of the gluteus minimus switch actions and become internal rotators beyond about 90 degrees of flexion.

Often, 3A is a useful test for FAI, discussed in last week’s post. Watch this video for how to screen for Cam and Pincer type impingements. I will demonstrate one very clearly in class! > Video link: https://www.youtube.com/watch?v=7RvaGasiWXM

The second test in the ROMA protocol involves squaring the pelvis to the legs maximally and rotating the trunk and pelvis around the flexed thigh (see Image 8). Although difficult to be precise, this position probably places the gluteus medius and minimus and the upper fibers of gluteus maximus on greater stretch. It definitely feels different to the stretch above. Recall that with the hip approaching 90 degrees of flexion, the internal rotation torque potential of the internal rotator muscles (the anterior fibers of the gluteus minimus or gluteus medius) dramatically increases. IMAGE 8

Summary Testing internal and external hip rotation can be confusing. The line of force of many of the muscles active in producing torque at the hip changes considerably depending on the position of the femur. External rotation as a test for “internal rotator muscles” doesn’t test anything in particular, as we have seen above. Recall that there are no primary internal rotators because no muscle is oriented even close to the horizontal plane. External rotation is more useful as a stretch test for the external hip rotators, as described above. The important thing is to conduct both tests as they can produce entirely different results in the same person, on the same hip!

Enjoy the videos below!