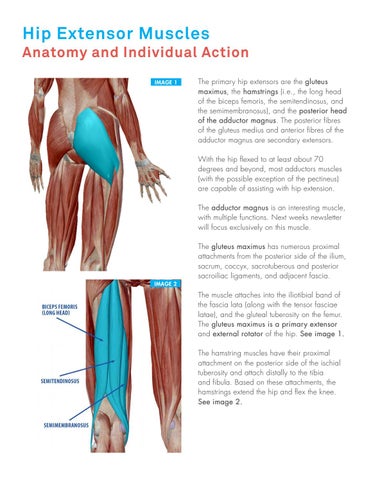 The primary hip extensors are the gluteus maximus, the hamstrings (i.e., the long head of the biceps femoris, the semitendinosus, and the semimembranosus), and the posterior head of the adductor magnus. The posterior fibres of the gluteus medius and anterior fibres of the adductor magnus are secondary extensors. With the hip flexed to at least about 70 degrees and beyond, most adductors muscles (with the possible exception of the pectineus) are capable of assisting with hip extension. The adductor magnus is an interesting muscle, with multiple functions. Next weeks newsletter will focus exclusively on this muscle. The gluteus maximus has numerous proximal attachments from the posterior side of the ilium, sacrum, coccyx, sacrotuberous and posterior sacroiliac ligaments, and adjacent fascia.

The muscle attaches into the iliotibial band of the fascia lata (along with the tensor fasciae latae), and the gluteal tuberosity on the femur. The gluteus maximus is a primary extensor and external rotator of the hip. See image 1. The hamstring muscles have their proximal attachment on the posterior side of the ischial tuberosity and attach distally to the tibia and fibula. Based on these attachments, the hamstrings extend the hip and flex the knee. See image 2.

The hamstrings can produce pelvic on femoral movement, or femoral on pelvic movement. Hip Extensors Controlling a Forward Lean of the Body Leaning forward while standing is a very common activity. Consider, for example, the forward lean used to brush your teeth over a sink. The muscular support at the hip for this near static posture is primarily the responsibility of the hamstring muscles. During a slight forward lean body weight is displaced just anterior to the medial-lateral axis of rotation at the hips. This slightly flexed posture is restrained by minimal eccentric activation from the gluteus maximus and hamstring muscles. A more significant forward lean, however, displaces body weight farther in front of the hips. Supporting this markedly flexed posture requires greater muscle activation from the hamstring muscles. In this instance, the femur remains stable and the pelvis rotates. This is known as pelvic on femoral rotation. (See image 3)

lean also elongates the hamstring muscles across both the hip and the knee joints. The resulting increased passive tension in these elongated biarticular muscles helps support the partially flexed position of the hips. For these reasons the hamstrings appear uniquely equipped to support the hip during a forward lean. Apparently, the nervous system holds the gluteus maximus partially in reserve for more powerful hip extension activities, such as rapidly climbing a flight of stairs. Lazy glutes? Think again. The work of Harvard Professor Daniel Liberman supports the same view-the gluteus maximus is recruited only when necessary and when it is mechanically optimised. Itâ&#x20AC;&#x2122;s all about the conservation of energy. For those interested in his work on this topic, here is the link: http:// jeb.biologists.org/content/209/11/2143 (Google the Law of Parsimony. Also note the difference in the size and development of the gluteus maximus muscles in sprinters compared to long distance runners. Sprinting is a high velocity activity that recruits the glutes and hence, the hypertrophy.)

Image 3. Although the hamstrings are not illustrated, the pelvis is moving in relation to fixed femurs. This is known as pelvic on femoral rotation.

Image 4. The femurs are moving in relation to relatively fixed pelvis. This is known as femoral on pelvic rotation. With the hip markedly flexed, many of the adductor muscles can produce an extension torque, thereby assisting the primary hip extensors.

Each grade generally produces different results on testing. Grade one tear may be painful with strength testing but do not reduce strength. Grade two tears are more extensive producing pain with strength testing and reduced strength, as well as pain on stretching. Grade three tears produce a visible and palpable defect together with a total loss of function. See Image 5

Site of muscle injuries In contrast to a ligament, a muscle tends to rupture at other sites in addition to its attachments. See Images 6, 7 and 8. A tear is likely to occur at a previous scar which is a site of weakness.

Image 6. A grade 3 rupture to the muscle belly.

Image 7. A musculotendinous junction tear Image 8. Tendons can tear or become ruptured at an attachment. If a fragment of bone is torn away it is described as an avulsion.

Strengthening the hamstrings Pelvic bridges or lifts are a good source of activation for the hamstrings and other hip extensors. See image 9 & 10. If the carriage is pressed away, the hip extensors will work eccentrically to control the hip height and the knee extension force of the quadriceps. Sometimes, the hamstrings cramp during this movement. This is the result of active insufficiency. Active insufficiency is a term applied to a multijoint muscle. It occurs when a multi-joint muscle reaches a length where it can no longer apply effective force. Opening out the angle at the knee joint should overcome this tendency.

Stretching the hamstrings and hip extensors should be done with two approaches. Approach A is to stretch with the hip in flexion and the knee straight. The focus of this approach is the hamstrings and the top of the gastrocnemius behind the knee. Approach B is to start with the knee bent and work towards straightening it. This changes the locus of the stretch to the adductor magnus and gluteus maximus. Practice both stretches below for rehabilitation and pre-habilitation. Stay tuned for the adductor magnus bonanza next week!

The following stretches are from the book “Stretching on the Pilates reformer, essential cues and images.” It is available on Amazon books here.

How to contract Pull entire leg back down toward floor OR try to bend knee. Hold for 5 seconds.

B. How to restretch On a breath out, allow carriage to slide in and hip to flex further.

What to watch out for: • Legs remain parallel. • Hips remain square to leg/

The posterior chain of leg muscles being stretched includes the Gastrocnemius, Hamstrings and extensor fibers of Gluteus Maximus.

Keep an eye on the horizontal leg too. If it lifts, there could be stifness in sartorious, psoas and others.

A & B. How to stretch Place foot on floor toward front of reformer. Press carriage away with rear leg and lower hips maximally with front knee bent. Once in position, try to straighten front leg without lifting hips to POT. Hips must remain square to line of rear leg.

B. How to contract Press both feet down.

C. How to restretch Slide carriage further out by trying to straighten front leg. Place hands either on bar or side of reformer.

What to watch out for: • Hips lifting. • Not lowering hips maximally in initial position.

This sequence shows an alternative position. Stand inside the carriage in the â&#x20AC;&#x153;wellâ&#x20AC;? and take some of your body weight onto your arms. This may facilitate more relaxation of your leg muscles. All other instructions are the same.

As the carriage moves away from the resting position, the hamstrings crossing the knee joint will stretch. Because the hip is already in a degree of flexion to begin the stretch, the gluteus maximus, in particular itâ&#x20AC;&#x2122;s extensor fibers, will stretch also.

For many, the psoas and rectus femoris on the underside of the rear leg will stretch too.