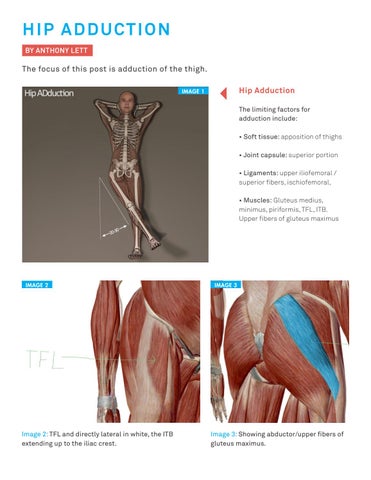 The focus of this post is adduction of the thigh. Hip Adduction

Image 2: TFL and directly lateral in white, the ITB extending up to the iliac crest.

Image 6: The piriformis in blue.

Image 5: Gluteus minimus, deep to gluteus medius extending to the greater trochanter, and overlapped by the ITB IMAGE 8

Image 7 and 8: The ITB from its origin on the: • the outer lip of the anterior iliac crest • anterior border of the ilium spine • outer surface of anterior superior iliac spine

Adducting the thigh, for example in image one, above, is not as effective in testing as other methods. Without meticulous attention to form, the pelvis will tilt laterally (the hip on the side being stretched will drop) and the stretch will be minimal. Although clients may experience a stretch in the abductors during this type of stretch, it is difficult to ascertain the extent to which the adduction is due to the lateral pelvic tilt and the ability of the abductors to “give in” to the stretch. Often, it will be felt in the muscles above the hip also - the obliques and QL.

The Ober or abduction test Ober developed this test in 1937. He argued that adduction should be no more than 10 degrees because excessive hip adduction would weaken the stability of the knee for standing one leg at a time, in gait for example. Indeed along with the lateral ligament, the ITB does provide a major source of stability to the lateral side of the knee.

pelvic tilt is the equivalent of abduction, and such movement would â&#x20AC;&#x153;give inâ&#x20AC;? to a tight TFL. Once the pelvis is stabilized and in line with the trunk (I.e. in the coronal plane) the leg is allowed to drop in adduction toward the table. The leg should not drop more than 10 degrees below horizontal according to Ober. IMAGE 9

The modified Ober test is an adaptation of the original where the test is performed with the leg straight. It places less strain on the patella and there is less interference from the rectus femoris. Although it was called the abduction test, its emphasis was on testing the TFL and ITB more so than the gluteals. The subject is sidelying with bottom knee and hip flexed to flattened lumbar spine, thereby stabilizing the pelvis against anterior pelvic tilt. Anterior pelvic tilt is the equivalent of hip flexion and is to be avoided because it gives in to the tightness that may be present in the TFL. The pelvis must also be stabilized to prevent lateral pelvic tilt, as noted above. Lateral

Two of the three ligaments of the hip in theory are able to prevent excessive adduction. It is unlikely that this limitation will be experience until the very end range is reached. Image 10: Upper iliofemoral / superior fibers

ROMA The ROMA recommends two tests to accurately assess hip adduction and stiffness in both the gluteals and external hip rotators. Note that neither of these tests assesses the TFL. The TFL is assessed with the hip flexors. The first test involves external rotation which moves the insertions of the gluteus medius and minimus and the piriformis slightly further from their origins. To test piriformis and posterior fibers of the gluteus medius, lean toward the foot as described. A neutral or anterior pelvic tilt will maximize the test, moving the origins of the muscles on the pelvis and sacrum further from their insertions on the greater trochanter.

Image 13 shows the line of force and close insertion points of gluteus medius, minimus and piriformis muscles on the superior and slightly anterior surface, and upper border of the greater trochanter respectively.

Images 14 and 15 show anterior and posterior aspects of the pelvis. Look for origins and insertions of the gluteus medius, minimus and piriformis muscles.

The second ROMA assessment has the trunk rotated over the femur. This emphasizes the gluteus medius, minimus and maximus (in particular its upper abductor fibers) more strongly. Image 16 depicts this to some extent. Although it may be difficult to visualize the distinctions in the muscle fibers being stretched theoretically, the two assessment stretches as described do feel qualitatively different. It is not uncommon to find a score of one in one of the tests, and a score of three in the other.

Does the ITB stretch? There is debate about the ability to stretch the ITB. A recent study demonstrated it is a possibility. Here is a link to that study: https://www.ncbi.nlm.nih.gov/pmc/articles/PMC5294943/ Following this, I questioned my anatomy lecturer, (a professor of surgical anatomy and sports physician) on the study. He has long held that fascia did not stretch. Here is his response: I would have thought that ANY stretch of such a tough tissue is significant. It would breakdown things like any weak scars, adhesions etc and because it has such a poor blood supply, any stimulation to that would help. As you know any fibrous tissue from inflammation shrinks making itb problems worse. So, it’s just my thoughts, but it may bring it back towards normal length and maybe help keep it away from the lateral femoral condyle. I still can’t see how it could be specifically stretched though, independently. No not independently, but it is the toughest thing on the lateral side. The question is, would you just be stretching the knee lateral ligament? As I said, I’m amazed that it can be stretched at all? Dodgy research?