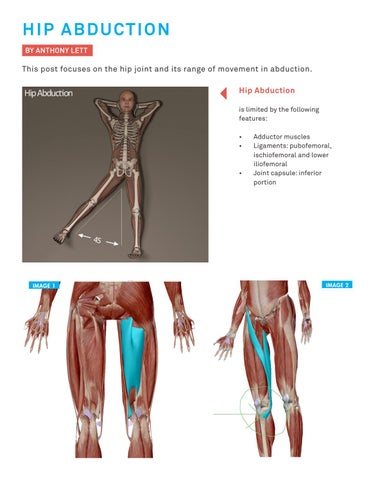 This post focuses on the hip joint and its range of movement in abduction. Hip Abduction is limited by the following features: • Adductor muscles • Ligaments: pubofemoral, ischiofemoral and lower iliofemoral • Joint capsule: inferior portion

Muscles The adductor muscles that are stretched during abduction include gracilis, adductor magnus (anterior head, see paragraph below in brackets) pectineus, adductor longus and brevis and sartorius. The medial hamstrings may also limit abduction. (The anterior head of the adductor magnus (Image one) has two sets of fibers: horizontal and oblique. The small set of horizontally directed fibers crosses from the inferior pubic ramus to the proximal end of the linea aspera and is often called the adductor minimus. The larger obliquely directed fibers run from the ischial ramus to nearly the entire length of the linea aspera, as far distally as the medial supracondylar line. Note the image of addcutor magnus on both legs. By way of contrast, the posterior fibers arise from the iscial tuberosity and run more verticaly. As a result they function as hip extensors.

Pes anserinus When performing a stretch for the adductors, clients will sometimes comment on discomfort around the front of the knee. See image two above. This is because the sartorius, gracilis and semitendinosus attach at this point called the pes anserinus, or “goose foot.” See images two and three above and to the left. If clients complain of this, allow them to bend the knee slightly. The sartorius, gracilis and semitendinosus are muscles that may limit abduction, and are “on stretch” during abduction.

Topography The adductors approach the hip from many different orientations. As a result, you need to change the angle between the pelvis and the femur to effectively stretch all of them. We will explore this in more detail in class. Take a look at image four below and the videos below to see how the adductor muscles vary in orientation from the very anterior aspect of the pelvis to the ischial tuberosity at the posterior aspect of the pelvis.

StretchFit Common StretchFit Stretches are below. Note that in image five, both knees are bent. This position will not stretch the three adductors mentioned above sartorius, gracilis and semitendinosus. Image six will result in a stretch to these muscles in the straight leg. IMAGE 5

Ligaments Very flexible clients will have their end range movement limited by the Ligaments: pubofemoral, ischiofemoral and lower iliofemoral. IMAGE 7

It is difficult to stretch ligaments in an acute sense. However, there is evidence that they adapt to tensile stress. Like most of the body, stress that is applied to it gradually without doing harm will result in gradual adaptation of tissues. The ligaments may become a bit longer. Note that this will NOT necessarily result in dangerous hypermobility. We will discuss this in class.

Achieving the full splits Compression, external rotation and pelvic rotation The full side splits are rarely achieved without external rotation of the femurs and strong anterior pelvic rotation. External rotation moves the greater trochanter posteriorly creating space in the joint and avoiding impingement. (Note that there are other types of femoral acetabular impingement. (See below) Anterior pelvic rotation is a common practice to slacken the hip ligaments and gain extra ROM. Can everyone achieve the full side splits with practice? NO! Side splits depends on a unique combination of femoral and acetabular configuration (joint shape), ligamentous mobility and of course muscular length.

Look at the bone images illustrating normal variation. You can imagine various combination of bony configuration and the effect that this would have on ROM.

Olga, a student I taught at a workshop in Moscow was a dancer in the Bolshoi Ballet Company. She told me that she stretched up to 2 hours each day and had done since childhood. You can imagine that she had been able to influence the shape of her hip joints favorably at a young age. Note that she is in external rotation of the femurs.

Pain is caused because two areas are contacting or impinging on each other resulting in pain. The femoral head rotates in the socket (acetabulum). During impingement, the neck of the femur contacts the lip of the hip socket. It is characterized by hip pain felt mainly in the groin and can result in chronic pain and decreased range of motion. FAIS has been reported to be associated with progressive osteoarthritis of the hip. Activities that cause problems with hip impingement are those that involve hip flexion, such as: sitting in a car, squatting, and bending during various athletic exercises. Pain can be minimal with straight and level walking. The two basic mechanisms of FAI are cam impingement (most common in young athletic

males) and pincer impingement (most common in middle-aged women). This classification is based on the type of anatomical variation contributing to the impingement process. Cam impingement is the result of abnormal shape of the femoral head-neck junction; while pincer impingement is the result of an abnormal shape of the hip socket (acetabulum). In this situation the socket â&#x20AC;&#x153;pinchesâ&#x20AC;? the neck during hip movement. Femoroacetabular impingement or FAI is a condition of too much friction in the hip joint. Basically, the ball (femoral head) and socket (acetabulum) rub abnormally creating damage to the hip joint. This causes pain and eventual loss of motion of the hip. The damage can occur to the articular cartilage (smooth white surface of the ball or socket) or the labral cartilage (soft tissue bumper of the socket).

arthritis and bone spurs (osteophytes) that are abnormally rubbing against each other causing labral tearing and injury to the cartilage. Surgery is most commonly performed to remove the bone spurs, sometimes referred to as the “hump” by contouring the bone on the neck ( procedure called a osteoplasty). Surgery also includes removing hyaline cartilage that is diseased (chondroplasty) and repair or removal of the injured labrum.

FAI is associated with cartilage damage, labral tears, early hip arthritis, hyperlaxity, sports hernias, and low back pain. FAI is common in high level athletes, but also occurs in active individuals. Most patients can be diagnosed with a history, physical exam, and plain x-ray films. A patient’s history will generally involve complaints of hip pain (front, side, or back) and loss of hip motion. The physical exam will generally confirm the patient’s history and eliminate other causes of hip pain. The plain x-ray films are used to determine the shape of the ball and socket as well as assess the amount of joint space in the hip. Less joint space is generally associated with more arthritis.

Originally the surgery was described as a surgical dislocation of the hip. This procedure is commonly performed, however, with the better technology and can be performed using an arthroscope (hip arthroscopy). In some cases the procedure requires an arthrotomy. Here a small incision (3 inch) is made in the front of the hip to gain access to the labrum and hip joint. The hip can be evaluated and the labrum is repaired if possible. The excess bone is then removed under direct visualization. Surgery is performed under a general or regional anesthetic. Hospital stay is generally overnight, but can be performed as an outpatient. Recovery time is dependent on the patient and the extent of bone removed. Some patients may be on protected weight bearing for 6 weeks if there has been extensive bone removal. In general recovery time is 3 to 6 months.

The treatment of FAIS is based on how much arthritis is present in the hip joint. If there is severe arthritis, with near bone-on-bone disease then a joint replacement would be indicated. However, a typical patient with FAIS has early