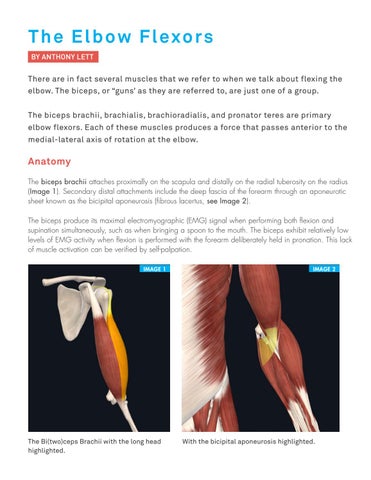 There are in fact several muscles that we refer to when we talk about flexing the elbow. The biceps, or â&#x20AC;&#x153;gunsâ&#x20AC;&#x2122; as they are referred to, are just one of a group. The biceps brachii, brachialis, brachioradialis, and pronator teres are primary elbow flexors. Each of these muscles produces a force that passes anterior to the medial-lateral axis of rotation at the elbow.

Anatomy The biceps brachii attaches proximally on the scapula and distally on the radial tuberosity on the radius (Image 1). Secondary distal attachments include the deep fascia of the forearm through an aponeurotic sheet known as the bicipital aponeurosis (fibrous lacertus, see Image 2). The biceps produce its maximal electromyographic (EMG) signal when performing both flexion and supination simultaneously, such as when bringing a spoon to the mouth. The biceps exhibit relatively low levels of EMG activity when flexion is performed with the forearm deliberately held in pronation. This lack of muscle activation can be verified by self-palpation. IMAGE 1

The Bi(two)ceps Brachii with the long head highlighted.

With the bicipital aponeurosis highlighted.

The Brachialis The brachialis lies deep to the biceps, originating on the anterior humerus and attaching distally on the extreme proximal ulna (Image 3 and 4). This muscle’s sole function is to flex the elbow. The brachialis has the largest cross-sectional area of any muscle crossing the elbow. In addition, the brachialis muscle also has the largest volume of all elbow flexors, measured by recording the volume of water displaced by the muscle.Large muscle volume suggests that the muscle has a large work capacity. For this reason, the brachialis has been called the “workhorse” of the elbow flexors. This name is due in part to the muscle’s large work capacity, but also to its active involvement in all types of elbow flexion activities, whether performed quickly or slowly or combined with pronation or supination. Because the brachialis attaches distally to the ulna, the motion of pronation or supination has no influence on its length, line of force, or internal moment arm.

The Brachioradialis The brachioradialis is the longest of all elbow flexor muscles, attaching proximally on the lateral supracondylar ridge of the humerus and distally near the styloid process of the radius. (See images 5 and 6). Maximal shortening of the brachioradialis causes full elbow flexion and rotation of the forearm to the near neutral position. EMG studies suggest that the brachioradialis is a primary elbow flexor, especially during rapid movements against a high resistance. The brachioradialis muscle can be readily palpated on the anterior-lateral aspect of the forearm. Resisted elbow flexion, from a position of about 90 degrees of flexion and neutral forearm rotation, causes the muscle to stand out or â&#x20AC;&#x153;bowstringâ&#x20AC;? sharply across the elbow. (See image 7). The bowstringing of this muscle increases its flexion moment arm to a length that exceeds that of the other flexors.

The pronator teres has a similar flexor moment arm as the brachialis, but only about 50% of its physiologic cross-sectional area.

Kinesiology A lateral view showing the line of force of three primary elbow flexors. See image 10. The internal moment arm (thick dark lines) for each muscle is drawn to approximate scale. Note that the elbow has been flexed about 100 degrees, placing the biceps tendon at 90 degrees of insertion with the radius. The elbow’s medial-lateral axis of rotation is shown piercing the capitulum.

Stretching In theory, stretching the brachialis, brachioradialis, and pronator teres should be as simple as straightening the arm to the point at which the elbow “locks.” Locking occurs when the olecranon fits into a small recess in the humerus known as the olecranon fossa, preventing the elbow’s extension beyond around 180 degrees. The biceps brachii are a two-joint muscle, producing flexion and supination at the elbow, and flexion at the shoulder. Reversing these motions, therefore, should stretch the origin and insertions of both the short and long heads thoroughly from end to end. If there is stiffness in either brachialis, brachioradialis, they will also feel the effects of this approach.

How to stretch On the combination station, the Roman Rings provide the fixed end from which the proximal attachments on the scapula can be moved away to increase the stretch. First, lift one arm to shoulder height, straighten it and then pronate the forearm. See image A. This moves the insertions of the biceps brachii on the radial tuberosity on the radius further from the proximal attachments. Next, try to externally rotate the humerus. This exposes both heads of the biceps brachii to the stretch and reduces any internal rotation at the shoulder that might have occurred with pronation of the forearm. Many clients will confuse pronation, which occurs at the radioulnar joint, with internal rotation of the shoulder. Internal rotation at the shoulder often reduces the stretch. Hold this position for 5 breaths.

Second, contract by pulling on the ring, or trying to bend the elbow. Remember no movement should occur, and the effort should be at around 30% of your maximum. Third, re-stretch. Keep your arm at the same height and then pronate further if you can. Next, turn your chest further away from your arm. Turning the chest moves the scapula away from the forearm, moving proximal and distal attachments apart.

Hold the stretch for the usual 10 to 15 breaths.

A. How to stretch Stand or sit as pictured. Lift and straighten arm. Pronate forearm (turn thumb down). Lean away from strap ensuring carriage does not move.

A. How to contract

Attempt to pull on strap and bend elbow.

B. How to restretch Lean further from strap. Rotate chest away from arm.

56 Lying Bicep HOW TO STRETCH: Photo A -- Place forearm and front of shoulder onto floor (forearm pronated, shoulder neutral if possible) -- Hand of straight arm to be higher than head -- Roll opposite hip, shoulder and leg backwards -- Press opposite hand into floor

HOW TO CONTRACT: Photo B -- Press arm down into floor

HOW TO RESTRETCH: Photo C and D -- Roll opposite hip, leg and shoulder further back -- Press opposite hand into floor -- Make a fist and flex wrist for greater forearm stretch

The floor version, from â&#x20AC;&#x153;Innovations in Pilates, Matwork for health and wellbeingâ&#x20AC;?

Why stretch the group? The biceps brachii in particular are commonly affected by tendinitis, and stretching may have a role to play in both the prevention and treatment of this condition. Biceps tendinitis is a common cause of shoulder pain and impingement (compression of tissue with movement), often developing in people who perform repetitive, overhead movements. Biceps tendinitis develops over time, with pain located at the front of the shoulder, and usually worsens with continued aggravating activity. When treating biceps tendinitis, therapists work to determine the exact source of the pain by assessing the entire shoulder, and typically prescribe a program of activity modification, stretching, and strengthening to resolve pain and return individuals to their desired activities. Posturally, stiffness in the biceps can affect the sitting position of the scapula. Some texts argue that since the biceps have proximal attachments on the scapula, stiffness will result in a scapula that wings, or tips at the inferior angle, or may sit in a protracted position. Stretching the biceps gives one a sense of openness through the arms and chest. Often, this translates to feelings of openness, relaxation and ease. All things considered, you have reason enough to give the stretches above a go! You know what Nike saysâ&#x20AC;Ś