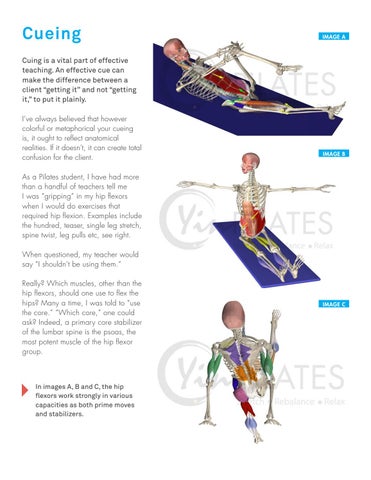 Cuing is a vital part of effective teaching. An effective cue can make the difference between a client “getting it” and not “getting it,” to put it plainly. I’ve always believed that however colorful or metaphorical your cueing is, it ought to reflect anatomical realities. If it doesn’t, it can create total confusion for the client.

As a Pilates student, I have had more than a handful of teachers tell me I was “gripping” in my hip flexors when I would do exercises that required hip flexion. Examples include the hundred, teaser, single leg stretch, spine twist, leg pulls etc, see right. When questioned, my teacher would say “I shouldn’t be using them.” Really? Which muscles, other than the hip flexors, should one use to flex the hips? Many a time, I was told to “use the core.” “Which core,” one could ask? Indeed, a primary core stabilizer of the lumbar spine is the psoas, the most potent muscle of the hip flexor group.

In images A, B and C, the hip flexors work strongly in various capacities as both prime moves and stabilizers.

What’s really happening? Gripping at the front of the hip is usually a mild form of cramping and is easily understood. It results from what is called “active insufficiency.” Active insufficiency occurs mostly (but not only) in two joint or bi-articular muscles due to insufficient sarcomere overlap. Basically, two joint muscles (like the rectus femoris, which “grips” during hip flexion and knee extension,) cannot exert enough tension to contract and shorten sufficiently over both joints simultaneously. The number of cross bridges formed from the myosin to the actin are dependent upon the muscle’s length, and as the muscle shortens, cross bridging is diminished.

Rectus femoris is a bi-articular muscle. It acts over both the hip and knee joint, although with difficulty when in a shortened position by flexing the hip. It acts with far greater effectiveness when kicking a ball for example, where the hip is in extension and the knee is flexed. This enables the muscles fibers to stretch and overlap with more efficiency. See Image D. The hamstrings also “grip” during the pelvic bridge for the same reason. They are shortened over both the hip and knee and cannot contract efficiently. It’s not an error, it’s an entirely normal response. Just push the carriage out a little to open the knee angle and try again. Voila! No cramp! See Image E.

Cueing “neutral spine.” Another mistaken cue is associated with finding the “neutral spine.” First, of course, what is “neutral” varies from person to person. See image F. Each person has a different shaped pelvis and spine. Note the two pelvises below and the differences in the acetabula, the shape and prominence of the iliac spines and how, in the image on the left, the pubis is much more forward.

The usual cue is to line up the pubic symphysis with the ASIS, called the “anterior pelvic plane.” See Image G.

It was long believed that everyone has a perfectly vertical anterior pelvic plane. However, while the range of variation is not related to gender, for 38% of people, the plane is inclined 5 degrees forward of vertical, while13 % of people have a 10% or larger inclination.1 Another study found that 95% of people have pelvic angles varying between 25 degrees forward (called anteversion of the pelvis and 11.5 degrees backwards (called retroversion of the pelvis.)2. If every Pilates student aligns his or her pelvic plane vertically, almost half the students will have done some degree of pelvic tucking, called posterior pelvic tilt. Thus, the anterior pelvic plane is not a reliable indicator of whether or not a pelvis and lumbar spine is in neutral.

Conclusion Cueing is an essential element of effective teaching. The cueing I use is very simple and FMRI studies show the simpler, the better. (They also stress the importance of cueing movement, not muscles.) As far as I know, my cueing is grounded in good anatomical understanding. But of course, “we don’t know what we don’t know!”, so further education is always critical. Anatomical variation is something that is only recently becoming a focus of study. It has enormous implications for our work. My upcoming book called “The Pilates Splits” has several chapters devoted to pelvic and femoral variation, and how it affects hip joint movement and the ability to perform various exercises. I’m excited about sharing it with you shortly!