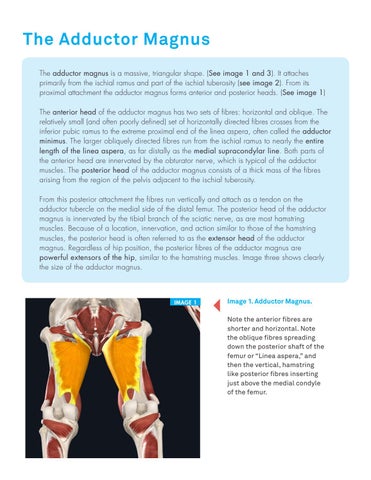 Image 1. Adductor Magnus. Note the anterior fibres are shorter and horizontal. Note the oblique fibres spreading down the posterior shaft of the femur or â&#x20AC;&#x153;Linea aspera,â&#x20AC;? and then the vertical, hamstring like posterior fibres inserting just above the medial condyle of the femur.

Function The line of force of the adductors approaches the hip from many different orientations. Functionally, therefore, the adductor muscles produce torques in all three planes at the hip. Frontal Plane Function The most obvious function of the adductor magnus is production of adduction torque. The torque controls the kinematics of both femoral-on-pelvic and pelvic-onfemoral hip adduction.

Sagittal Plane Function Regardless of hip position, the posterior fibres of the adductor magnus are powerful extensors of the hip, similar to the hamstring muscles. From a hip position of near extension, the adductors now have a flexor moment arm and generate a flexion torque similar to that of the rectus femoris, for example. The adductor muscles therefore provide a useful source of flexion and extension torque at the hip. The bidirectional torques are useful during high-power, cyclic motions such as sprinting, cycling, running up a steep hill, and descending and rising from a deep squat. When the hip is near full flexion, the adductors are most mechanically prepared to augment the extensors. In contrast, when the hip is near full extension, they are most mechanically prepared to augment the flexors. This utilitarian function of the adductors may partially explain their relatively high susceptibility to strain injury during running and jumping, especially while quickly changing directions.

In the studio To strengthen the adductors, the Skater exercise above is an excellent option. The scooter too activates the entire adductor group, as do many of the feet in straps exercises. The arabesque, performed with the hip square to the line of the stance leg rather than opened, works the large posterior head of the adductor magnus strongly in conjunction with the gluteus maximus, to extend the hip. See Image 5. IMAGE 5

To stretch the adductors, and magnus in particular, try the two stretches below. The reformer stretch is from “Stretching on the Pilates reformer, essential cues and images,” and the mat stretch is taken from Innovations in Pilates, Matwork for health and wellbeing.” Both available on this link: https://www.amazon.com/Anthony-Lett/e/B01LX32GGO Enjoy the work and don’t neglect this import muscle group in your training and teaching.

A. How to stretch Press carriage away, bend front knee to just over 90 degrees. Lower hips maximally. Press back leg away while maintaining angle at front leg. Arms inside front leg. Lift chest to engage lats.

B. How to contract Press back foot and knee down into carriage. Press front foot into reformer.

C. How to restretch

What to watch out for: • Low back extension. • Hips not lowering in beginning position. • Angle at front knee too narrow.

The Lunge 2.0 is a strong stretch for the rectus femoris and adductor magnus seen below. Psoas major can also be seen. Keeping the back straight by lifting the chest will engage the latissimus dorsi. This will tension the thoracolumbar fascia and support the lower back region.

Rectus femoris attaches from two points just under the front tip of the pelvis known as the ASIS. The psoas major can be seen attaching to the front of the lumbar vertebra. It joins with the illiacus and then wraps around to insert onto the lessor trochantor of the femur.

A portion of gluteus maximus inserts onto the leg bone or femur. As a result, when the leg is strongly flexed like this it will stretch. The adductor magnus once crossed the knee joint. Over time, its tendon became the lateral knee ligament. A portion of it will also stretch in this position.

33 Kneeling Short Long HOW TO STRETCH: Photo A -- Place even weight on hands and legs -- Lean to one side at a time -- Lean hips fowards and backwards also

HOW TO CONTRACT: Photo B -- Lower yourself onto elbows if possible -- Press knee and foot into the mat -B -