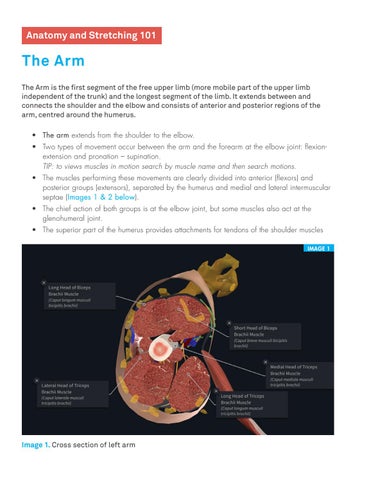 The Arm The Arm is the first segment of the free upper limb (more mobile part of the upper limb independent of the trunk) and the longest segment of the limb. It extends between and connects the shoulder and the elbow and consists of anterior and posterior regions of the arm, centred around the humerus. • The arm extends from the shoulder to the elbow. • Two types of movement occur between the arm and the forearm at the elbow joint: flexionextension and pronation – supination. TIP: to views muscles in motion search by muscle name and then search motions. • The muscles performing these movements are clearly divided into anterior (flexors) and posterior groups (extensors), separated by the humerus and medial and lateral intermuscular septae (Images 1 & 2 below). • The chief action of both groups is at the elbow joint, but some muscles also act at the glenohumeral joint. • The superior part of the humerus provides attachments for tendons of the shoulder muscles IMAGE 1

Muscles of Arm Of the four major arm muscles, three are flexors are in the anterior (flexor) compartment • Biceps brachii • Brachialis • Coracobrachialis • One extensor (triceps brachii) is in the posterior compartment • A distally placed assistant to the triceps, the anconeus, also lies within the posterior compartment image below • The flexor muscles of the anterior compartment are almost twice as strong as the extensors in all positions; consequently, we are better pullers than pushers. It should be noted, however, that the extensors of the elbow are particularly important for raising oneself out of a chair and for wheelchair activity. Therefore, conditioning of the triceps is of particular importance in elderly or disabled persons. The arm muscles and their attachments, innervation, and actions are described in Table 1.

Table 1. Muscles of the arm Muscle

Tuberosity of radius and fascia of forearm via bicipital aponeurosis

Tip of coracoid process of scapula

Distal half of anterior surface of humerus

Flexes forearm in all positions

Proximal end of olecranon of ulna and fascia of forearm

1. The spinal cord segmental innervation is indicated (e.g., â&#x20AC;&#x153;C5, C6, C7â&#x20AC;? means that the nerves supplying the biceps brachii are derived from the fifth and sixth cervical segments of the spinal cord). Numbers in boldface (C6) indicate the main segmental innervation. Damage to one or more of the listed spinal cord segments or to the motor nerve roots arising from them results in paralysis of the muscles concerned. 2. Some of lateral part of brachialis is innervated by a branch of the radial nerve

Note, the brachioradialis is a muscle of the extensor compartment of the forearm.

Biceps brachii • As the term biceps brachii indicates, the proximal attachment of this fusiform muscle usually has two heads (bi, two + L. caput, head). • The two heads of the biceps arise proximally by tendinous attachments to processes of the scapula, their fleshy bellies uniting just distal to the middle of the arm images below. • Approximately 10% of people have a third head to the biceps. • When present, the third head extends from the superomedial part of the brachialis (with which it is blended), usually lying posterior to the brachial artery. • In either case, a single biceps tendon forms distally and attaches primarily to the radius. Image below • Although the biceps is located in the anterior compartment of the arm, it has no attachment to the humerus.

• The biceps is a “three-joint muscle,” crossing and capable of effecting movement at the glenohumeral, elbow, and radio-ulnar joints, although it primarily acts at the latter two. • Its action and effectiveness are markedly affected by the position of the elbow and forearm. When the elbow is extended, the biceps is a simple flexor of the forearm; however, as elbow flexion approaches 90° and more power is needed against resistance, the biceps is capable of two powerful movements, depending on the position of the forearm. When the elbow is flexed close to 90°and the forearm is supinated, the biceps is most efficient in producing flexion. Alternately, when the forearm is pronated, the biceps is the primary (most powerful) supinator of the forearm. For example, it is used when right-handed people drive a screw into hard wood and when inserting a corkscrew and pulling the cork from a wine bottle. • The biceps barely operates as a flexor when the forearm is pronated, even against resistance. • The major attachment of the bicep is to the radial tuberosity via the biceps tendon. • A large membranous band, called the bicipital aponeurosis runs from the tendon to merge with the deep fascia of the flexor muscles covering the medial side of the forearm (See Image 5). IMAGE 3

As the term biceps brachii indicates, the proximal attachment of this fusiform muscle usually has two heads

Brachialis • A flattened fusiform muscles lying posterior/deep to the biceps (see Image 7). • Distal attachment covers the anterior part of the elbow joint • Main flexor of the forearm • Flexes the forearm in all position, regardless of the degree of pronation or supination • Regarded as the workhorse of the elbow flexor.

The posterior compartment Triceps brachii • The triceps brachii is a large fusiform muscle in the posterior compartment of the arm (Images 8-10 below). • As indicated by its name, the triceps has three heads: long, lateral, and medial. • The triceps is the main extensor of the forearm. • Because its long head crosses the glenohumeral joint, the triceps helps stabilize the adducted glenohumeral joint by serving as a shunt muscle, resisting inferior displacement of the head of the humerus. • The long head also aids in extension and adduction of the arm • The medial head is the workhorse of forearm extension, active at all speeds and in the presence or absence of resistance. • The lateral head is strongest but is recruited into activity primarily against resistance (Hamill and Knutzen, 2003). • Pronation and supination of the forearm do not affect triceps operation. • Just proximal to the distal attachment of the triceps is a friction-reducing sub-tendinous olecranon bursa, between the triceps tendon and the olecranon. IMAGE 8

Anconeus • The anconeus is a small, triangular muscle on the posterolateral aspect of the elbow; it is usually partially blended with the triceps (Image 11). • The anconeus helps the triceps extend the forearm and tenses of the capsule of the elbow joint, preventing its being pinched during extension. • It is also said to abduct the ulna during pronation of the forearm. Image 11. Anconeus •

Stretching It is difficult to isolate each head of the biceps, or indeed the entire flexor compartment. However, you may feel each of the stretches below in different places if done slowly with great awareness. For this reason, it is always worth trying or teaching all of the stretches until you find which ones have the greatest effect. Of course, many of the stretches provided in the posterior and anterior atlanto-occipital regions will also effect the muscles of the posterior compartment of the arm.

Lying Bicep HOW TO STRETCH: Photo A - Place forearm and front of shoulder onto floor (forearm pronated, shoulder neutral if possible) - Hand of straight arm to be higher than head - Roll opposite hip, shoulder and leg backwards - Press opposite hand into floor

D HOW TO CONTRACT: Photo B - Press arm down into floor

HOW TO RESTRETCH: Photo C and D - Roll opposite hip, leg and shoulder further back - Press opposite hand into floor - Make a fist and flex wrist for greater forearm stretch

The stretch below is often experienced as a stretch for the entire anterior flexor compartment.

A. How to stretch Sit as pictured, and place hands on footbar. Place hands closer together for stronger effect. Draw shoulder blades together. Lift chest and slide carriage away slowly to POT.

How to contract Press hands down into footbar.

How to restretch Lift chest. Slide carriage away further.

What to watch out for: • Flexing/rounding chest/thorax. • Allowing shoulders to round/ protracting scapula. • Internally rotating arms.

Turn head and chest away from tight side. If you have a partner available, have them place one hand on your shoulder blade and press it firmly onto your rib cage. Have them place the other hand on the front of your shoulder and draw the shoulder backwards. Follow other instructions.

A. How to stretch Stand or sit as pictured. Lift and straighten arm. Pronate forearm (turn thumb down). Lean away from strap ensuring carriage does not move.

A. How to contract

Attempt to pull on strap and bend elbow.

B. How to restretch Lean further from strap. Rotate chest away from arm.

Posterior compartment of the arm In our experience it is unusual for the lateral and medial heads of the triceps to experience stiffness. The long head of triceps, because of its differing role, and attachment to the scapula, can sometimes feel stiff. The Stretch included below for the latissimus dorsi is also an effective stretch for the long head of triceps. As the elbow is bent in the variation, the lateral and medial heads might also begin to stretch.

Tricep/Lats HOW TO STRETCH: Photo A - Reach hand between shoulder blades - Pull elbow towards back of head HOW TO CONTRACT: Photo A - Press elbow away from body

HOW TO RESTRETCH: Photo B - Pull elbow further towards back of head

A & B. How to stretch Place legs between or against shoulder rests. Hips above knees. Arms on footbar. Lower chest toward carriage.

B. How to contract Press arms down into footbar.

C. How to restretch Lower chest further toward carriage.

What to watch out for: • Hips not above knees. • Shoulder pain/impingement.