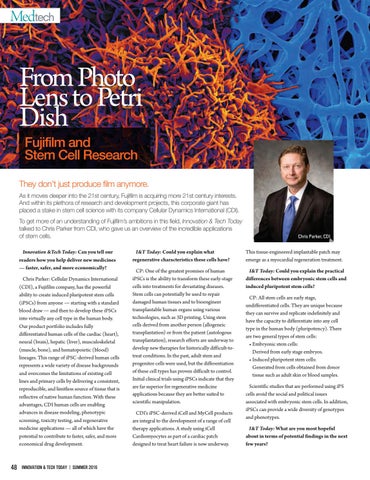 They don’t just produce film anymore. As it moves deeper into the 21st century, Fujifilm is acquiring more 21st century interests. And within its plethora of research and development projects, this corporate giant has placed a stake in stem cell science with its company Cellular Dynamics International (CDI). To get more of an understanding of Fujifilm’s ambitions in this field, Innovation & Tech Today talked to Chris Parker from CDI, who gave us an overview of the incredible applications of stem cells. Innovation &Tech Today: Can you tell our readers how you help deliver new medicines — faster, safer, and more economically? Chris Parker: Cellular Dynamics International (CDI), a Fujifilm company, has the powerful ability to create induced pluripotent stem cells (iPSCs) from anyone — starting with a standard blood draw — and then to develop these iPSCs into virtually any cell type in the human body. Our product portfolio includes fully differentiated human cells of the cardiac (heart), neural (brain), hepatic (liver), musculoskeletal (muscle, bone), and hematopoietic (blood) lineages. This range of iPSC-derived human cells represents a wide variety of disease backgrounds and overcomes the limitations of existing cell lines and primary cells by delivering a consistent, reproducible, and limitless source of tissue that is reflective of native human function. With these advantages, CDI human cells are enabling advances in disease modeling, phenotypic screening, toxicity testing, and regenerative medicine applications — all of which have the potential to contribute to faster, safer, and more economical drug development.

I&T Today: Could you explain what regenerative characteristics these cells have?

This tissue-engineered implantable patch may emerge as a myocardial regeneration treatment.

CP: One of the greatest promises of human iPSCs is the ability to transform these early-stage cells into treatments for devastating diseases. Stem cells can potentially be used to repair damaged human tissues and to bioengineer transplantable human organs using various technologies, such as 3D printing. Using stem cells derived from another person (allogeneic transplantation) or from the patient (autologous transplantation), research efforts are underway to develop new therapies for historically difficult-totreat conditions. In the past, adult stem and progenitor cells were used, but the differentiation of these cell types has proven difficult to control. Initial clinical trials using iPSCs indicate that they are far superior for regenerative medicine applications because they are better suited to scientific manipulation.

CDI’s iPSC-derived iCell and MyCell products are integral to the development of a range of cell therapy applications. A study using iCell Cardiomyocytes as part of a cardiac patch designed to treat heart failure is now underway.

CP: All stem cells are early stage, undifferentiated cells. They are unique because they can survive and replicate indefinitely and have the capacity to differentiate into any cell type in the human body (pluripotency). There are two general types of stem cells: • Embryonic stem cells: Derived from early stage embryos. • Induced pluripotent stem cells: Generated from cells obtained from donor tissue such as adult skin or blood samples. Scientific studies that are performed using iPS cells avoid the social and political issues associated with embryonic stem cells. In addition, iPSCs can provide a wide diversity of genotypes and phenotypes. I&T Today: What are you most hopeful about in terms of potential findings in the next few years? 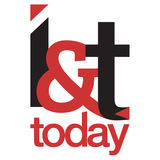 Innovation & Tech Today’s Summer Issue is filled with the season’s hottest topics in technology, including a special focus on outdoor and ad...

Innovation & Tech Today’s Summer Issue is filled with the season’s hottest topics in technology, including a special focus on outdoor and ad...