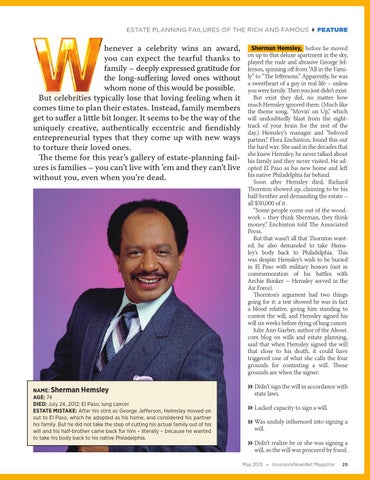 ESTATE PLANNING FAILURES OF THE RICH AND FAMOUS

henever a celebrity wins an award, you can expect the tearful thanks to family – deeply expressed gratitude for the long-suffering loved ones without whom none of this would be possible. But celebrities typically lose that loving feeling when it comes time to plan their estates. Instead, family members get to suffer a little bit longer. It seems to be the way of the uniquely creative, authentically eccentric and fiendishly entrepreneurial types that they come up with new ways to torture their loved ones. The theme for this year’s gallery of estate-planning failures is families – you can’t live with ’em and they can’t live without you, even when you’re dead.

NAME: Sherman Hemsley AGE: 74 DIED: July 24, 2012; El Paso; lung cancer ESTATE MISTAKE: After his stint as George Jefferson, Helmsley moved on out to El Paso, which he adopted as his home, and considered his partner his family. But he did not take the step of cutting his actual family out of his will and his half-brother came back for him – literally – because he wanted to take his body back to his native Philadelphia.

Sherman Hemsley, before he moved on up to that deluxe apartment in the sky, played the rude and abrasive George Jefferson, spinning off from “All in the Family” to “The Jeffersons.” Apparently, he was a sweetheart of a guy in real life – unless you were family. Then you just didn’t exist. But exist they did, no matter how much Hemsley ignored them. (Much like the theme song, “Movin’ on Up,” which will undoubtedly blast from the eighttrack of your brain for the rest of the day.) Hemsley’s manager and “beloved partner,” Flora Enchinton, found this out the hard way. She said in the decades that she knew Hemsley, he never talked about his family and they never visited. He adopted El Paso as his new home and left his native Philadelphia far behind. Soon after Hemsley died, Richard Thornton showed up, claiming to be his half-brother and demanding the estate – all $50,000 of it. “Some people come out of the woodwork – they think Sherman, they think money,” Enchinton told The Associated Press. But that wasn’t all that Thornton wanted, he also demanded to take Hemsley’s body back to Philadelphia. This was despite Hemsley’s wish to be buried in El Paso with military honors (not in commemoration of his battles with Archie Bunker – Hemsley served in the Air Force). Thornton’s argument had two things going for it: a test showed he was in fact a blood relative, giving him standing to contest the will, and Hemsley signed his will six weeks before dying of lung cancer. Julie Ann Garber, author of the About. com blog on wills and estate planning, said that when Hemsley signed the will that close to his death, it could have triggered one of what she calls the four grounds for contesting a will. Those grounds are when the signer: D  idn’t sign the will in accordance with state laws. L  acked capacity to sign a will. W  as unduly influenced into signing a will. D  idn’t realize he or she was signing a will, so the will was procured by fraud. May 2013 » InsuranceNewsNet Magazine 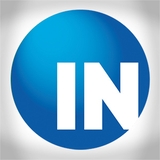 From Ray Charles to Ted Williams, our annual roundup of folks who achieved fame and fortune during their lifetimes, yet left behind a mess f...

From Ray Charles to Ted Williams, our annual roundup of folks who achieved fame and fortune during their lifetimes, yet left behind a mess f...