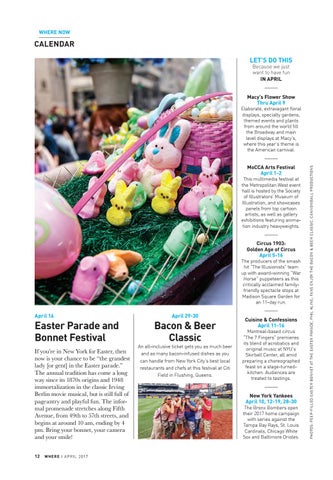 This multimedia festival at the Metropolitan West event hall is hosted by the Society of Illustrators’ Museum of Illustration, and showcases panels from top cartoon artists, as well as gallery exhibitions featuring animation industry heavyweights.

The producers of the smash hit “The Illusionists” team up with award-winning “War Horse” puppeteers as this critically acclaimed familyfriendly spectacle stops at Madison Square Garden for an 11-day run.

Easter Parade and Bonnet Festival If you’re in New York for Easter, then now is your chance to be “the grandest lady [or gent] in the Easter parade.” The annual tradition has come a long way since its 1870s origins and 1948 immortalization in the classic Irving Berlin movie musical, but is still full of pageantry and playful fun. The informal promenade stretches along Fifth Avenue, from 49th to 57th streets, and begins at around 10 am, ending by 4 pm. Bring your bonnet, your camera and your smile!

An all-inclusive ticket gets you as much beer and as many bacon-infused dishes as you can handle from New York City’s best local restaurants and chefs at this festival at Citi Field in Flushing, Queens.

Montreal-based circus “The 7 Fingers” premieres its blend of acrobatics and original music at NYU’s Skirball Center, all amid preparing a choreographed feast on a stage-turnedkitchen. Audiences are treated to tastings.

Elaborate, extravagant floral displays, specialty gardens, themed events and plants from around the world fill the Broadway and main level displays at Macy’s, where this year’s theme is the American carnival. 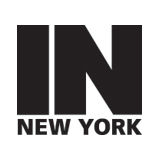 Get the inside scoop: one of the city's top restaurateurs on four-star casual dining. Plus, the best eateries and shops in the East Village,...

Get the inside scoop: one of the city's top restaurateurs on four-star casual dining. Plus, the best eateries and shops in the East Village,...