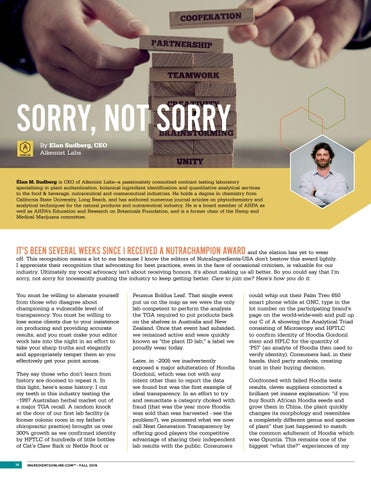 Élan M. Sudberg is CEO of Alkemist Labs—a passionately committed contract testing laboratory specializing in plant authentication, botanical ingredient identification and quantitative analytical services to the food &amp; beverage, nutraceutical and cosmeceutical industries. He holds a degree in chemistry from California State University, Long Beach, and has authored numerous journal articles on phytochemistry and analytical techniques for the natural products and nutraceutical industry. He is a board member of AHPA as well as AHPA’s Education and Research on Botanicals Foundation, and is a former chair of the Hemp and Medical Marijuana committee.

IT&#39;S BEEN SEVERAL WEEKS SINCE I RECEIVED A NUTRACHAMPION AWARD

and the elation has yet to wear off. This recognition means a lot to me because I know the editors of NutraIngredients-USA don’t bestow this award lightly. I appreciate their recognition that advocating for best practices, even in the face of occasional criticism, is valuable for our industry. Ultimately my vocal advocacy isn’t about receiving honors, it’s about making us all better. So you could say that I’m sorry, not sorry for incessantly pushing the industry to keep getting better. Care to join me? Here’s how you do it: You must be willing to alienate yourself from those who disagree about championing a vulnerable level of transparency. You must be willing to lose some clients due to your insistence on producing and providing accurate results, and you must make your editor work late into the night in an effort to take your sharp truths and elegantly and appropriately temper them so you effectively get your point across. They say those who don’t learn from history are doomed to repeat it. In this light, here’s some history: I cut my teeth in this industry testing the ~1997 Australian herbal market out of a major TGA recall. A random knock at the door of our first lab facility (a former colonic room in my father&#39;s chiropractic practice) brought us over 300% growth as we confirmed identity by HPTLC of hundreds of little bottles of Cat’s Claw Bark or Nettle Root or 14

Peumus Boldus Leaf. That single event put us on the map as we were the only lab competent to perform the analysis the TGA required to put products back on the shelves in Australia and New Zealand. Once that event had subsided, we remained active and were quickly known as “the plant ID lab;” a label we proudly wear today. Later, in ~2005 we inadvertently exposed a major adulteration of Hoodia Gordonii, which was not with any intent other than to report the data we found but was the first example of ideal transparency. In an effort to try and resuscitate a category choked with fraud (that was the year more Hoodia was sold than was harvested - see the problem?), we pioneered what we now call Next Generation Transparency by offering good players the competitive advantage of sharing their independent lab results with the public. Consumers

could whip out their Palm Treo 650 smart phone while at GNC, type in the lot number on the participating brand’s page on the world-wide-web and pull up our C of A showing the Analytical Triad consisting of Microscopy and HPTLC to confirm identity of Hoodia Gordonii stem and HPLC for the quantity of ‘P57’ (an analyte of Hoodia then used to verify identity). Consumers had, in their hands, third party analysis, creating trust in their buying decision. Confronted with failed Hoodia tests results, clever suppliers concocted a brilliant yet insane explanation: “if you buy South African Hoodia seeds and grow them in China, the plant quickly changes its morphology and resembles a completely different genus and species of plant” that just happened to match the common adulterant of Hoodia which was Opuntia. This remains one of the biggest “what the?” experiences of my 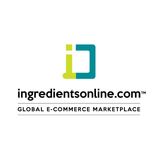