A Day for Our Troops 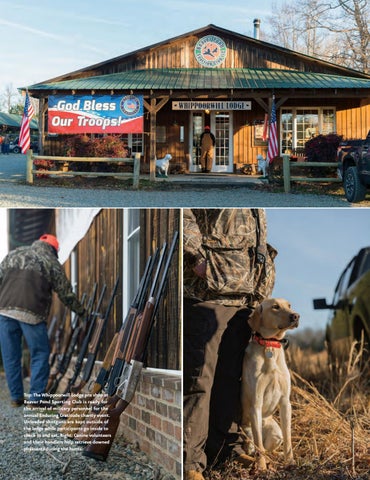 Top: The Whippoorwill Lodge pro shop at Beaver Pond Sporting Club is ready for the arrival of military personnel for the annual Enduring Gratitude charity event. Unloaded shotguns are kept outside of the lodge while participants go inside to check in and eat. Right: Canine volunteers and their handlers help retrieve downed pheasants during the hunts. 6

A Day for the

he day starts at a brisk 19 degrees, but Col. Norman Alexander McDaniel (U.S.A.F. Ret.) is comfortable. He and his wife, Jean, and daughter, Crystal, are relaxing on a plush leather sofa under the glow of an antler chandelier. A fireplace crackles across the room and soon the sound of shotgun blasts from outside will reverberate around the spacious clubhouse. McDaniel is here at Beaver Pond Sporting Club in Snow Camp to join about 160 active duty military and veterans being treated to a day of pheasant hunting and sporting clays, free of charge, hosted by an equal number of veterans. McDaniel will primarily serve as a spectator—he has been a featured speaker in past years—but as a Vietnam veteran and prisoner of war, he brings a unique perspective on gratitude. “I have a zest and a joy for life. Every day is a blessing to me,” McDaniel says. Enduring Gratitude is the brain child of Johnny Miller, owner of Beaver Pond Sporting Club. Miller made his money in the furniture business, got out and built Beaver Pond Sporting Club. He never served in the armed forces but feels compelled to thank those who did. “We basically started this event back in 2010,” he says as truckloads of hunters arrive in the crisp morning air and our conversation is periodically

A group of servicemen wait for a pheasant to fly beside wrapped hay bales that serve as stand sites. Cases of shotgun shells donated for the hunts are visible on one bale.

interrupted by shotgun blasts as event staff release pheasants in an adjacent field. “Some business guys out of High Point and myself felt like we wanted to give back to the veterans and active duty military. I was not in the military. When I was coming up, it was right when the war stopped, and Nixon brought everybody home. I was in school and then I got out and I’ve always been real passionate about the outdoors. “I’ve bird hunted ever since I was small. My dad had one bird dog, a pointer named Andy, a little pointer. Every afternoon we’d go out and there were literally birds everywhere. You’d see eight or 10 coveys of birds in half a day.” An event of this magnitude comes with a hefty price tag. Miller estimates the total cost is between $40,000 and $50,000, and notes that Enduring Gratitude is a 501(c)(3) organization. He’s grateful for the sponsors who have signed on over the years. “Big Rock Sports out of Graham is a major sponsor,” he says as he looks about the grounds. “Ed Small, the CEO, is very passionate about veterans and he provided a tremendous amount of ammo for us. We’ve got Adama, which is up the road in Raleigh, they’re in the chemical fertilizer business, they’re a major name sponsor. We have the Wallace Foundation, which is out of High Point and Winston-Salem, they give a tremendous donation to this every year. We have probably 50 to 60 major sponsors that are very gracious to be able to fund this.” The event has grown since launching in 2010 with 22 participants. Organizers hoped to double that number by spreading the word through contacts at Fort Bragg, Camp Lejuene, Seymour Johnson and various National Guard units. And although they have more than achieved that goal, they still have hopes of reaching even more active duty and retired military interested in hunting. “I have had veterans tell me this is the most genuine event they go to,” said Phil Miller, brother of Johnny Miller and president of Enduring Gratitude’s board of directors. 8

“The other thing is, as we’ve asked for sponsorship, the word gets out and I tell ’em what we’re doing, they say ‘I want to be a part of that.’ Adama, the title sponsor, has stepped up in a big way. As we raise more money we’re talking about ways to maybe have guys come throughout the year, shoot a round of sporting clays…There’s tens of thousands of these guys and we want to see if there’s any way we can reach more of them.”

Top: Flags fly from the top of the pheasant tower at Beaver Pond Sporting Club. Below: A black Labrador retriever sits at heel and waits for a chance to retrieve a pheasant.

Dozens of shotguns of different makes and models lean against the outside wall of the main clubhouse as participants shuffle in for orientation and a safety briefing. The hunters have been placed in groups and some walk to the sporting clays course while others board trailers pulled by tractors and head for the pheasant shoot. When they arrive, round hay bales mark stand sites, each with several cases of shotshells in 20 and 12 gauge. Most bales have a volunteer with a retriever, usually Labs, ready to retrieve downed pheasants. Most are well trained, but one Boykin spaniel is ignoring his handler and racing around the field. At one station, a group of hunters await the start of the pheasant hunt. Melissa and Sean Brooks of Jacksonville, both U.S. Navy veterans, kept one eye on the sky for birds as they share their experience. “We came here last year and brought three visitors this year,” says Melissa. “It’s a great opportunity for veterans. I’d like for it to be better publicized.” As she finishes her last word a rooster pheasant comes winging by, and a barrage of gun fire erupts. The pheasant escapes as gunners chide each other on the miss. There’s one thing apparent about a hunt with current and former military folks: They were never taught to conserve ammo. As more pheasants fly into range, shots ring out and occasionally a pheasant falls to the ground and a dog makes the retrieve. The lucky gun is often a mystery, and it doesn’t matter, as the birds will be dressed and distributed to all who want them for the table.

Col. Norman McDaniel (U.S.A.F. Retired) talks about his time as a prisoner of war during the Vietnam War. He spent six years as a POW, which gives him a unique perspective on life and freedom.

After a couple of hours, hunters and handlers start their way back to the clubhouse. On a back patio, three propane pig cookers are in use to feed the 320-some participants and volunteers. Steven Woodall of Greensboro has been here since midnight. He’s overseeing 21 pork shoulders and 300 pounds of chicken. “It’s just something I can do for them,” he says, shrugging. “It’s a good time for fellowship and you meet a lot of good people.”

Give to Receive Out in the gravel parking lot, Lt. Col. Brock Benedict is standing alone after securing his Turkish-made Yildiz 20 gauge over-andunder shotgun. I ask him about his thoughts on the event. “Fantastic. Absolutely well run, well organized,” he says. “We shot clays this morning.” Benedict, who is stationed at Fort Bragg with Special Operations Aviation Command has been to a few events like Enduring Gratitude and has a frame of reference. “I’ve participated in some other nonprofit hunting organizations as a veteran service that’s provided, but this is the biggest of any kind that I’ve been a part of,” Benedict says. “We’re thankful for the folks doing it. We’re thankful that they’re thankful. And there are a lot of veterans who volunteer. It’s a testament to the folks of this great country who served.” Toward the back of the complex of connected buildings at Beaver Pond are some folding tables with six men cleaning pheasants. It’s a thankless chore, but these folks volunteered because it needed to be done. One of the men is John Wynn, a career Army soldier now living in Greensboro. He explains his choice of jobs as he plucks a bird. “I like to do the work nobody else likes to do,” Wynn says. “God said those that give receive. I think it’s good to show the young people the need to give back. Right now, I’m in good health so I’ll give back as long as I can. Somebody will do good for me later on.”

Smiles are plentiful at Enduring Gratitude, as participants enjoy camaraderie afield. Below: Lt. Col. Brock Benedict, a first-time participant from Fort Bragg, awaits the morning hunt and a shuttle to the pheasant field.

People finish eating and begin to gather in small groups before awaiting instruction for their afternoon activities. The morning hunters will shoot sporting clays and the morning clay shooters will hunt pheasants. Back in the clubhouse, Col. McDaniel was still relaxing with his family. He was the featured speaker at the previous year’s event, but recent surgery kept him from the shooting events. He talks about his history with Enduring Gratitude. “Around 2013 to 2014, I received word from one of my fellow ex-POWs, Porter Halliburton, of Greensboro and he’s a member of this organization,” says McDaniel. “He’d been their guest speaker once or twice and they asked him if he knew of another ex-POW, and he thought of me. They contacted me and I agreed to be their speaker for the 2017 event. Once you speak as an honored guest you sort of become a regular member and they invite you back each year. This year I was fortunately invited back to introduce the guest speaker this time.” But there’s more to McDaniel’s story. A lot more. During the Vietnam War, McDaniel was flying in a EB66C Skywarrior over North Vietnam when it was blown out of the sky by a surface-to-air missile. McDaniel survived parachuting only to be captured and spend almost seven years as a prisoner of war (POW). His wife didn’t know if he was alive or dead for the first year and a half. He spent time at the infamous Zoo and the Hanoi Hilton. “There were times when the torture got so bad I didn’t think I’d live to see another day,” he says. After he was released in 1973 he eventually wrote a book, “Yet Another Voice,” about his experience as a POW and the readjustment afterward. “This year I’m recovering from an operation, so I chose not to shoot,” he says, “but next year, the Lord willing and the creek don’t rise, I’ll be here.” Visit enduringgratitude.org for more information. Mike Zlotnicki is the associate editor of Wildlife in North Carolina. winc | 2018 fall outdoor guide

A Day for Our Troops

A Day for Our Troops- Enduring Gratitude an outdoor events