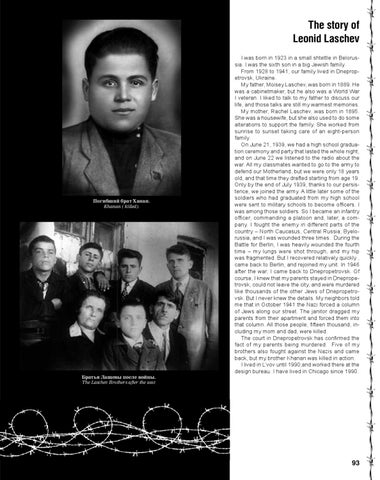 The story of Leonid Laschev

I was born in 1923 in a small shtettle in Belorussia. I was the sixth son in a big Jewish family. From 1928 to 1941, our family lived in Dnepropetrovsk, Ukraine. My father, Moisey Laschev, was born in 1889. He was a cabinetmaker, but he also was a World War I veteran. I liked to talk to my father to discuss our life, and those talks are still my warmest memories. My mother, Rachel Laschev, was born in 1895. She was a housewife, but she also used to do some alterations to support the family. She worked from sunrise to sunset taking care of an eight-person family. On June 21, 1939, we had a high school graduation ceremony and party that lasted the whole night, and on June 22 we listened to the radio about the war. All my classmates wanted to go to the army to defend our Motherland, but we were only 18 years old, and that time they drafted starting from age 19. Only by the end of July 1939, thanks to our persistence, we joined the army. A little later some of the soldiers who had graduated from my high school were sent to military schools to become officers. I was among those soldiers. So I became an infantry officer, commanding a platoon and, later, a company. I fought the enemy in different parts of the country – North Caucasus, Central Russia, Byelorussia, and I was wounded three times. During the Battle for Berlin, I was heavily wounded the fourth time – my lungs were shot through, and my hip was fragmented. But I recovered relatively quickly , came back to Berlin, and rejoined my unit. In 1946 after the war, I came back to Dnepropetrovsk. Of course, I knew that my parents stayed in Dnepropetrovsk, could not leave the city, and were murdered like thousands of the other Jews of Dnepropetrovsk. But I never knew the details. My neighbors told me that in October 1941 the Nazi forced a column of Jews along our street. The janitor dragged my parents from their apartment and forced them into that column. All those people, fifteen thousand, including my mom and dad, were killed. The court in Dnepropetrovsk has confirmed the fact of my parents being murdered. Five of my brothers also fought against the Nazis and came back, but my brother Khanan was killed in action. I lived in L’vov until 1990,and worked there at the design bureau. I have lived in Chicago since 1990.