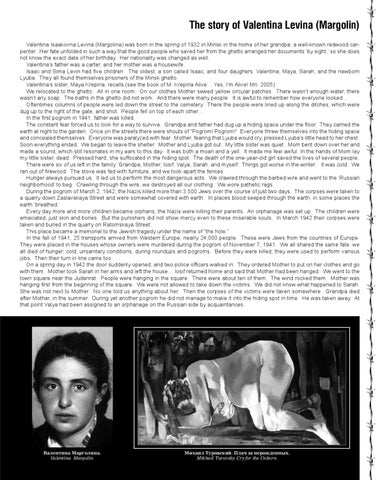 The story of Valentina Levina (Margolin) Valentina Isaakovna Levina (Margolina) was born in the spring of 1932 in Minsk in the home of her grandpa, a well-known redwood carpenter. Her fate unfolded in such a way that the good people who saved her from the ghetto arranged her documents ‘by sight,’ so she does not know the exact date of her birthday. Her nationality was changed as well. Valentina’s father was a carter, and her mother was a housewife. Isaac and Sima Levin had five children. The oldest, a son called Isaac, and four daughers: Valentina, Maya, Sarah, and the newborn Lyuba. They all found themselves prisoners of the Minsk ghetto. Valentina’s sister, Maya Krepina, recalls (see the book of M. Krepina Alive… Yes, I’m Alive! Mn. 2005): We relocated to the ghetto. All in one room. On our clothes Mother sewed yellow circular patches. There wasn’t enough water, there wasn’t any soap. The baths in the ghetto did not work. And there were many people. It is awful to remember how everyone looked… Oftentimes columns of people were led down the street to the cemetery. There the people were lined up along the ditches, which were dug up to the right of the gate, and shot. People fell on top of each other… In the first pogrom in 1941, father was killed. The constant fear forced us to look for a way to survive. Grandpa and father had dug up a hiding space under the floor. They carried the earth at night to the garden. Once on the streets there were shouts of “Pogrom! Pogrom!” Everyone threw themselves into the hiding space and concealed themselves. Everyone was paralyzed with fear. Mother, fearing that Lyuba would cry, pressed Lyuba’s little head to her chest. Soon everything ended. We began to leave the shelter. Mother and Lyuba got out. My little sister was quiet. Mom bent down over her and made a sound, which still resonates in my ears to this day. It was both a moan and a yell. It made me feel awful. In the hands of Mom lay my little sister, dead. Pressed hard, she suffocated in the hiding spot. The death of the one-year-old girl saved the lives of several people. There were six of us left in the family: Grandpa, Mother, Iosif, Valya, Sarah, and myself. Things got worse in the winter. It was cold. We ran out of firewood. The stove was fed with furniture, and we took apart the fences. Hunger always pursued us. It led us to perform the most dangerous acts. We crawled through the barbed wire and went to the ‘Russian neighborhood’ to beg. Crawling through the wire, we destroyed all our clothing. We wore pathetic rags. During the pogrom of March 2, 1942, the Nazis killed more than 3,500 Jews over the course of just two days. The corpses were taken to a quarry down Zaslavskaya Street and were somewhat covered with earth. In places blood seeped through the earth, in some places the earth ‘breathed.’ Every day more and more children became orphans; the Nazis were killing their parents. An orphanage was set up. The children were emaciated, just skin and bones. But the punishers did not show mercy even to these miserable souls. In March 1942 their corpses were taken and buried in the quarry on Ratomskaya Street. This place became a memorial to the Jewish tragedy under the name of “the hole.” In the fall of 1941, 25 transports arrived from Western Europe, nearly 24,000 people. These were Jews from the countries of Europe. They were placed in the houses whose owners were murdered during the pogrom of November 7, 1941. We all shared the same fate: we all died of hunger, cold, unsanitary conditions, during roundups and pogroms. Before they were killed, they were used to perform various jobs. Then their turn in line came too. On a spring day in 1942 the door suddenly opened, and two police officers walked in. They ordered Mother to put on her clothes and go with them. Mother took Sarah in her arms and left the house… Iosif returned home and said that Mother had been hanged. We went to the town square near the Judenrat. People were hanging in the square. There were about ten of them. The wind rocked them. Mother was hanging first from the beginning of the square. We were not allowed to take down the victims. We did not know what happened to Sarah. She was not next to Mother. No one told us anything about her. Then the corpses of the victims were taken somewhere. Grandpa died after Mother, in the summer. During yet another pogrom he did not manage to make it into the hiding spot in time. He was taken away. At that point Valya had been assigned to an orphanage on the Russian side by acquaintances.