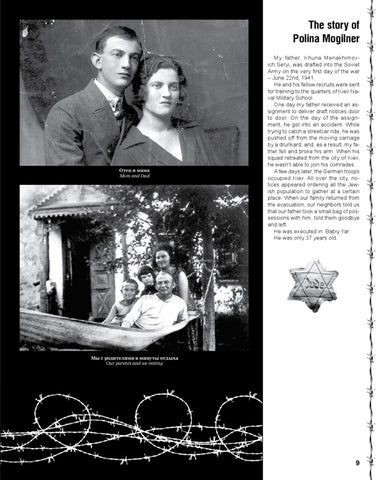 The story of Polina Mogilner

My father, Khuna Menakhimovich Seryi, was drafted into the Soviet Army on the very first day of the war – June 22nd, 1941. He and his fellow recruits were sent for training to the quarters of Kiev Naval Military School. One day my father received an assignment to deliver draft notices door to door. On the day of the assignment, he got into an accident. While trying to catch a streetcar ride, he was pushed off from the moving carriage by a drunkard, and, as a result, my father fell and broke his arm. When his squad retreated from the city of Kiev, he wasn’t able to join his comrades. A few days later, the German troops occupied Kiev. All over the city, notices appeared ordering all the Jewish population to gather at a certain place. When our family returned from the evacuation, our neighbors told us that our father took a small bag of possessions with him, told them goodbye and left. He was executed in Babiy Yar. He was only 37 years old.