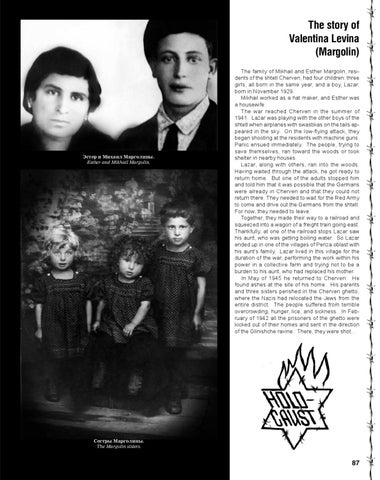 The story of Valentina Levina (Margolin)

The family of Mikhail and Esther Margolin, residents of the shtetl Cherven, had four children: three girls, all born in the same year, and a boy, Lazar, born in November 1929. Mikhail worked as a hat maker, and Esther was a housewife. The war reached Cherven in the summer of 1941. Lazar was playing with the other boys of the shtetl when airplanes with swastikas on the tails appeared in the sky. On the low-flying attack, they began shooting at the residents with machine guns. Panic ensued immediately. The people, trying to save themselves, ran toward the woods or took shelter in nearby houses. Lazar, along with others, ran into the woods. Having waited through the attack, he got ready to return home. But one of the adults stopped him and told him that it was possible that the Germans were already in Cherven and that they could not return there. They needed to wait for the Red Army to come and drive out the Germans from the shtetl. For now, they needed to leave. Together, they made their way to a railroad and squeezed into a wagon of a freight train going east. Thankfully, at one of the railroad stops Lazar saw his aunt, who was getting boiling water. So Lazar ended up in one of the villages of Penza oblast with his aunt’s family. Lazar lived in this village for the duration of the war, performing the work within his power in a collective farm and trying not to be a burden to his aunt, who had replaced his mother. In May of 1945 he returned to Cherven. He found ashes at the site of his home. His parents and three sisters perished in the Cherven ghetto, where the Nazis had relocated the Jews from the entire district. The people suffered from terrible overcrowding, hunger, lice, and sickness. In February of 1942 all the prisoners of the ghetto were kicked out of their homes and sent in the direction of the Glinishche ravine. There, they were shot…