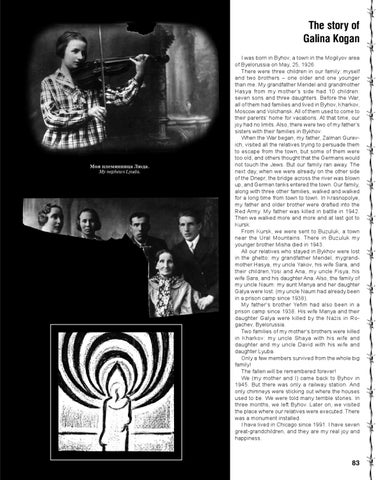 The story of Galina Kogan

I was born in Byhov, a town in the Mogilyov area of Byelorussia on May, 25, 1926. There were three children in our family: myself and two brothers – one older and one younger than me. My grandfather Mendel and grandmother Hasya from my mother’s side had 10 children: seven sons and three daughters. Before the War, all of them had families and lived in Byhov, Kharkov, Moscow and Volchansk. All of them used to come to their parents’ home for vacations. At that time, our joy had no limits. Also, there were two of my father’s sisters with their families in Bykhov. When the War began, my father, Zalman Gurevich, visited all the relatives trying to persuade them to escape from the town, but some of them were too old, and others thought that the Germans would not touch the Jews. But our family ran away. The next day, when we were already on the other side of the Dnepr, the bridge across the river was blown up, and German tanks entered the town. Our family, along with three other families, walked and walked for a long time from town to town. In Krasnopolye, my father and older brother were drafted into the Red Army. My father was killed in battle in 1942. Then we walked more and more and at last got to Kursk. From Kursk, we were sent to Buzuluk, a town near the Ural Mountains. There in Buzuluk my younger brother Misha died in 1943. All our relatives who stayed in Bykhov were lost in the ghetto: my grandfather Mendel, mygrandmother Hasya, my uncle Yakov, his wife Sara, and their children,Yosi and Ana, my uncle Fisya, his wife Sara, and his daughter Ana. Also, the family of my uncle Naum: my aunt Manya and her daughter Galya were lost. (my uncle Naum had already been in a prison camp since 1938). My father’s brother Yefim had also been in a prison camp since 1938. His wife Manya and their daughter Galya were killed by the Nazis in Rogachev, Byelorussia. Two families of my mother’s brothers were killed in Kharkov: my uncle Shaya with his wife and daughter and my uncle David with his wife and daughter Lyuba. Only a few members survived from the whole big family! The fallen will be remembered forever! We (my mother and I) came back to Byhov in 1945. But there was only a railway station. And only chimneys were sticking out where the houses used to be. We were told many terrible stories. In three months, we left Byhov. Later on, we visited the place where our relatives were executed. There was a monument installed. I have lived in Chicago since 1991. I have seven great-grandchildren, and they are my real joy and happiness.