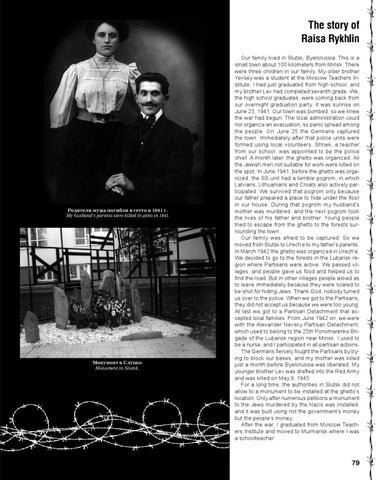 The story of Raisa Rykhlin

Our family lived in Slutsk, Byelorussia. This is a small town about 100 kilometers from Minsk. There were three children in our family. My older brother Yevsey was a student at the Moscow Teachers Institute, I had just graduated from high school, and my brother Lev had completed seventh grade. We, the high school graduates, were coming back from our overnight graduation party. It was sunrise on June 23, 1941. Our town was bombed, so we knew the war had begun. The local administration could not organize an evacuation, so panic spread among the people. On June 25 the Germans captured the town. Immediately after that police units were formed using local volunteers. Shnek, a teacher from our school, was appointed to be the police chief. A month later, the ghetto was organized. All the Jewish men not suitable for work were killed on the spot. In June 1941, before the ghetto was organized, the SS unit had a terrible pogrom, in which Latvians, Lithuanians and Croats also actively participated. We survived that pogrom only because our father prepared a place to hide under the floor in our house. During that pogrom my husband’s mother was murdered, and the next pogrom took the lives of his father and brother. Young people tried to escape from the ghetto to the forests surrounding the town Our family was afraid to be captured. So we moved from Slutsk to Urech’e to my father’s parents. In March 1942 the ghetto was organized in Urech’e. We decided to go to the forests in the Lubansk region where Partisans were active. We passed villages, and people gave us food and helped us to find the road. But in other villages people asked as to leave immediately because they were scared to be shot for hiding Jews. Thank God, nobody turned us over to the police. When we got to the Partisans, they did not accept us because we were too young. At last we got to a Partisan Detachment that accepted local families. From June 1942 on, we were with the Alexander Nevsky Partisan Detachment, which used to belong to the 25th Ponomarenko Brigade of the Lubansk region near Minsk. I used to be a nurse, and I participated in all partisan actions. The Germans fiercely fought the Partisans by trying to block our bases, and my mother was killed just a month before Byelorussia was liberated. My younger brother Lev was drafted into the Red Army and was killed on May 8, 1945. For a long time, the authorities in Slutsk did not allow to a monument to be installed at the ghetto’s location. Only after numerous petitions a monument to the Jews murdered by the Nazis was installed, and it was built using not the government’s money but the people’s money. After the war, I graduated from Moscow Teachers Institute and moved to Murmansk where I was a schoolteacher.