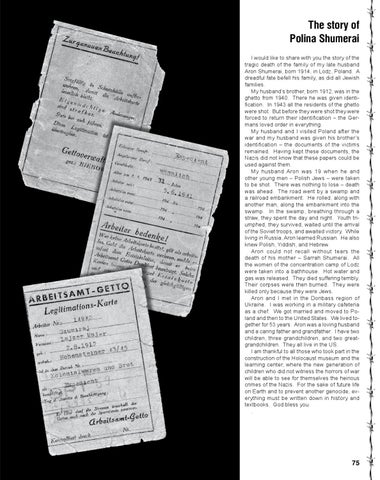 The story of Polina Shumerai I would like to share with you the story of the tragic death of the family of my late husband Aron Shumerai, born 1914, in Lodz, Poland. A dreadful fate befell his family, as did all Jewish families. My husband’s brother, born 1912, was in the ghetto from 1940. There he was given identification. In 1943 all the residents of the ghetto were shot. But before they were shot they were forced to return their identification – the Germans loved order in everything. My husband and I visited Poland after the war and my husband was given his brother’s identification – the documents of the victims remained. Having kept these documents, the Nazis did not know that these papers could be used against them. My husband Aron was 19 when he and other young men – Polish Jews – were taken to be shot. There was nothing to lose – death was ahead. The road went by a swamp and a railroad embankment. He rolled, along with another man, along the embankment into the swamp. In the swamp, breathing through a straw, they spent the day and night. Youth triumphed, they survived, waited until the arrival of the Soviet troops, and awaited victory. While living in Russia, Aron learned Russian. He also knew Polish, Yiddish, and Hebrew. Aron could not recall without tears the death of his mother – Sarrah Shumerai. All the women of the concentration camp of Lodz were taken into a bathhouse. Hot water and gas was released. They died suffering terribly. Their corpses were then burned. They were killed only because they were Jews. Aron and I met in the Donbass region of Ukraine. I was working in a military cafeteria as a chef. We got married and moved to Poland and then to the United States. We lived together for 53 years. Aron was a loving husband and a caring father and grandfather. I have two children, three grandchildren, and two greatgrandchildren. They all live in the US. I am thankful to all those who took part in the construction of the Holocaust museum and the learning center, where the new generation of children who did not witness the horrors of war will be able to see for themselves the heinous crimes of the Nazis. For the sake of future life on Earth and to prevent another genocide, everything must be written down in history and textbooks. God bless you. .