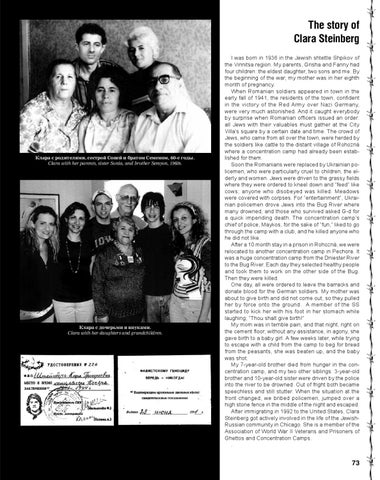 The story of Clara Steinberg

I was born in 1936 in the Jewish shtettle Shpikov of the Vinnitsa region. My parents, Grisha and Fanny had four children: the eldest daughter, two sons and me. By the beginning of the war, my mother was in her eighth month of pregnancy. When Romanian soldiers appeared in town in the early fall of 1941, the residents of the town, confident in the victory of the Red Army over Nazi Germany, were very much astonished. And it caught everybody by surprise when Romanian officers issued an order: all Jews with their valuables must gather at the City Villa’s square by a certain date and time. The crowd of Jews, who came from all over the town, were herded by the soldiers like cattle to the distant village of Rohozná where a concentration camp had already been established for them. Soon the Romanians were replaced by Ukrainian policemen, who were particularly cruel to children, the elderly and women. Jews were driven to the grassy fields where they were ordered to kneel down and “feed” like cows; anyone who disobeyed was killed. Meadows were covered with corpses. For “entertainment”, Ukrainian policemen drove Jews into the Bug River where many drowned, and those who survived asked G-d for a quick impending death. The concentration camp’s chief of police, Maykos, for the sake of “fun,” liked to go through the camp with a club, and he killed anyone who he did not like. After a 10 month stay in a prison in Rohozná, we were relocated to another concentration camp in Pechora. It was a huge concentration camp from the Dniester River to the Bug River. Each day they selected healthy people and took them to work on the other side of the Bug. Then they were killed. One day, all were ordered to leave the barracks and donate blood for the German soldiers. My mother was about to give birth and did not come out, so they pulled her by force onto the ground. A member of the SS started to kick her with his foot in her stomach while laughing, “Thou shalt give birth!” My mom was in terrible pain, and that night, right on the cement floor, without any assistance, in agony, she gave birth to a baby girl. A few weeks later, while trying to escape with a child from the camp to beg for bread from the peasants, she was beaten up, and the baby was shot. My 7-year-old brother died from hunger in the concentration camp, and my two other siblings: 3-year-old brother and 10-year-old sister were driven by the police into the river to be drowned. Out of fright both became speechless and still stutter. When the situation at the front changed, we bribed policemen, jumped over a high stone fence in the middle of the night and escaped. After immigrating in 1992 to the United States, Clara Steinberg got actively involved in the life of the JewishRussian community in Chicago. She is a member of the Association of World War II Veterans and Prisoners of Ghettos and Concentration Camps. .