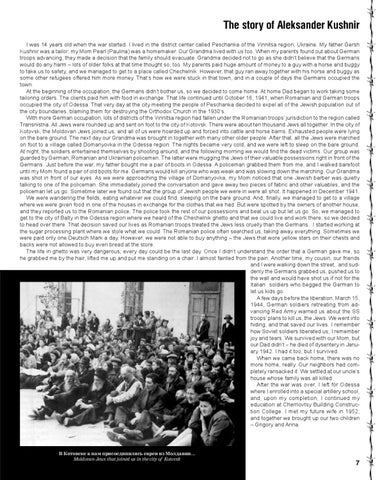 The story of Aleksander Kushnir I was 14 years old when the war started. I lived in the district center called Peschanka of the Vinnitsa region, Ukraine. My father Gersh Kushnir was a tailor; my Mom Pearl (Paulina) was a homemaker. Our Grandma lived with us too. When my parents found out about German troops advancing, they made a decision that the family should evacuate. Grandma decided not to go as she didn’t believe that the Germans would do any harm – lots of older folks at that time thought so, too. My parents paid huge amount of money to a guy with a horse and buggy to take us to safety, and we managed to get to a place called Chechelnik. However, that guy ran away together with his horse and buggy as some other refugees offered him more money. That’s how we were stuck in that town, and in a couple of days the Germans occupied the town. At the beginning of the occupation, the Germans didn’t bother us, so we decided to come home. At home Dad began to work taking some tailoring orders. The clients paid him with food in exchange. That life continued until October 16, 1941, when Romanian and German troops occupied the city of Odessa. That very day at the city meeting the people of Peschanka decided to expel all of the Jewish population out of the city boundaries, blaming them for destroying the Orthodox Church in the 1930’s. With more German occupation, lots of districts of the Vinnitsa region had fallen under the Romanian troops’ jurisdiction to the region called Transnistria. All Jews were rounded up and sent on foot to the city of Kotovsk. There were about ten thousand Jews all together. In the city of Kotovsk, the Moldovan Jews joined us, and all of us were hoarded up and forced into cattle and horse barns. Exhausted people were lying on the bare ground. The next day our Grandma was brought in together with many other older people. After that, all the Jews were marched on foot to a village called Domanyovka in the Odessa region. The nights became very cold, and we were left to sleep on the bare ground. At night, the soldiers entertained themselves by shooting around, and the following morning we would find the dead victims. Our group was guarded by German, Romanian and Ukrainian policemen. The latter were mugging the Jews of their valuable possessions right in front of the Germans. Just before the war, my father bought me a pair of boots in Odessa. A policeman grabbed them from me, and I walked barefoot until my Mom found a pair of old boots for me. Germans would kill anyone who was weak and was slowing down the marching. Our Grandma was shot in front of our eyes. As we were approaching the village of Domanyovka, my Mom noticed that one Jewish barber was quietly talking to one of the policeman. She immediately joined the conversation and gave away two pieces of fabric and other valuables, and the policeman let us go. Sometime later we found out that the group of Jewish people we were in were all shot. It happened in December 1941. We were wandering the fields, eating whatever we could find, sleeping on the bare ground. And, finally, we managed to get to a village where we were given food in one of the houses in exchange for the clothes that we had. But were spotted by the owners of another house, and they reported us to the Romanian police. The police took the rest of our possessions and beat us up but let us go. So, we managed to get to the city of Balty in the Odessa region where we heard of the Chechelnik ghetto and that we could live and work there, so we decided to head over there. That decision saved our lives as Romanian troops treated the Jews less cruelly than the Germans. I started working at the sugar processing plant where we stole what we could. The Romanian police often searched us, taking away everything. Sometimes we were paid only one Deutsch Mark a day. However, we were not able to buy anything – the Jews that wore yellow stars on their chests and backs were not allowed to buy even bread at the store. The life in ghetto was very dangerous; every day could be the last day. Once I didn’t understand the order that a German gave me, so he grabbed me by the hair, lifted me up and put me standing on a chair. I almost fainted from the pain. Another time, my cousin, our friends and I were walking down the street, and suddenly the Germans grabbed us, pushed us to the wall and would have shot us if not for the Italian soldiers who begged the German to let us kids go. A few days before the liberation, March 15, 1944, German soldiers retreating from advancing Red Army warned us about the SS troops’ plans to kill us, the Jews. We went into hiding, and that saved our lives. I remember how Soviet soldiers liberated us; I remember joy and tears. We survived with our Mom, but our Dad didn’t – he died of dysentery in January 1942. I had it too, but I survived. When we came back home, there was no more home, really. Our neighbors had completely ransacked it. We settled at our uncle’s house whose family was all killed. After the war was over, I left for Odessa where I enrolled into a special artillery school, and, upon my completion, I continued my education at Chernovtsy Building Construction College. I met my future wife in 1952, and together we brought up our two children – Grigory and Anna.