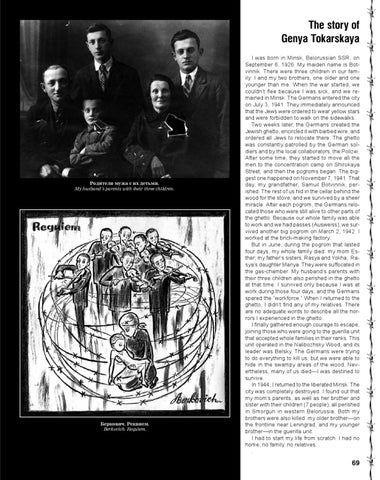 The story of Genya Tokarskaya

I was born in Minsk, Belorussian SSR, on September 6, 1926. My maiden name is Botvinnik. There were three children in our family: I and my two brothers, one older and one younger than me. When the war started, we couldn’t flee because I was sick, and we remained in Minsk. The Germans entered the city on July 3, 1941. They immediately announced that the Jews were ordered to wear yellow stars and were forbidden to walk on the sidewalks. Two weeks later, the Germans created the Jewish ghetto, encircled it with barbed wire, and ordered all Jews to relocate there. The ghetto was constantly patrolled by the German soldiers and by the local collaborators, the Polizei. After some time, they started to move all the men to the concentration camp on Shirokaya Street, and then the pogroms began. The biggest one happened on November 7, 1941. That day, my grandfather, Samuil Botvinnik, perished. The rest of us hid in the cellar behind the wood for the stove, and we survived by a sheer miracle. After each pogrom, the Germans relocated those who were still alive to other parts of the ghetto. Because our whole family was able to work and we had passes (Ausweiss), we survived another big pogrom on March 2, 1942. I worked at the brick-making factory. But in June, during the pogrom that lasted four days, my whole family died: my mom Esther; my father’s sisters, Rasya and Yokha; Rasya’s daughter Manya. They were suffocated in the gas-chamber. My husband’s parents with their three children also perished in the ghetto at that time. I survived only because I was at work during those four days, and the Germans spared the “workforce.” When I returned to the ghetto, I didn’t find any of my relatives. There are no adequate words to describe all the horrors I experienced in the ghetto. I finally gathered enough courage to escape, joining those who were going to the guerilla unit that accepted whole families in their ranks. This unit operated in the Nalibozhsky Wood, and its leader was Belsky. The Germans were trying to do everything to kill us, but we were able to hide in the swampy areas of the wood. Nevertheless, many of us died—I was destined to survive. In 1944, I returned to the liberated Minsk. The city was completely destroyed. I found out that my mom’s parents, as well as her brother and sister with their children (7 people), all perished in Smorgun in western Belorussia. Both my brothers were also killed: my older brother—on the frontline near Leningrad, and my younger brother—in the guerilla unit. I had to start my life from scratch. I had no home, no family, no relatives. .