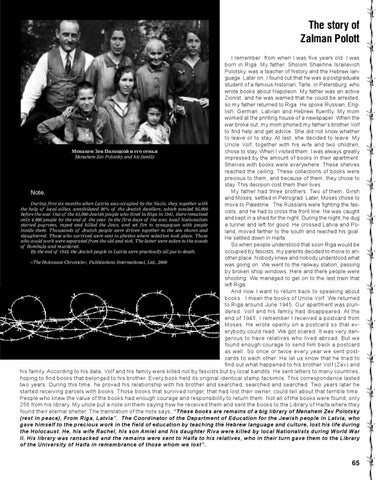 The story of Zalman Polott I remember from when I was five years old. I was born in Riga. My father, Sholom Shakhne Israilevich Polotsky, was a teacher of history and the Hebrew language. Later on, I found out that he was a postgraduate student of a famous historian, Tarle, in Petersburg, who wrote books about Napoleon. My father was an active Zionist, and he was warned that he could be arrested, so my father returned to Riga. He spoke Russian, English, German, Latvian and Hebrew fluently. My mom worked at the printing house of a newspaper. When the war broke out, my mom phoned my father’s brother Volf to find help and get advice. She did not know whether to leave or to stay. At last, she decided to leave. My Uncle Volf, together with his wife and two children, Менахем Зев Полоцкой и его семья chose to stay. When I visited them, I was always greatly Menahem Zev Polotsky and his family impressed by the amount of books in their apartment. Shelves with books were everywhere. These shelves reached the ceiling. These collections of books were precious to them, and because of them, they chose to stay. This decision cost them their lives. My father had three brothers. Two of them, Girsh Note. and Moses, settled in Petrograd. Later, Moses chose to During first six months when Latvia was occupied by the Nazis, they, together with move to Palestine. The Russians were fighting the fasthe help of local allies, annihilated 90% of the Jewish dwellers, which totaled 95,000 cists, and he had to cross the front line. He was caught before the war. Out of the 45,000 Jewish people who lived in Riga in 1941, there remained and kept in a shed for the night. During the night, he dug only 4,800 people by the end of the year. In the first days of the war, local Nationalists a tunnel and left for good. He crossed Latvia and Postarted pogroms, raped and killed the Jews, and set fire to synagogues with people inside them. Thousands of Jewish people were driven together to the sea shores and land, moved farther to the south and reached his goal. slaughtered. Those who survived were sent to ghettos where selection took place. Those He settled down in Haifa. who could work were separated from the old and sick. The latter were taken to the woods So when people understood that soon Riga would be of Rombula and murdered. occupied by fascists, my parents decided to move to anBy the end of 1943, the Jewish people in Latvia were practically all put to death. other place. Nobody knew and nobody understood what «The Holocaust Chronicle», Publications International, Ltd., 2000 was going on. We went to the railway station, passing by broken shop windows. Here and there people were shooting. We managed to get on to the last train that left Riga. And now I want to return back to speaking about books. I mean the books of Uncle Volf. We returned to Riga around June 1945. Our apartment was plundered. Volf and his family had disappeared. At the end of 1945, I remember I received a postcard from Moses. He wrote openly on a postcard so that everybody could read. We got scared. It was very dangerous to have relatives who lived abroad. But we found enough courage to send him back a postcard as well. So once or twice every year we sent postcards to each other. He let us know that he tried to find out what happened to his brother Volf (Zev) and his family. According to his data, Volf and his family were killed not by fascists but by local bandits. He sent letters to many countries, hoping to find books that belonged to his brother. Every book held its original identical stamp facsimile. This correspondence lasted two years. During this time, he proved his relationship with his brother and searched, searched and searched. Two years later he started receiving parcels with books. Those books that survived longer, that had lost their owner, could tell about that terrible time. People who knew the value of the books had enough courage and responsibility to return them. Not all of the books were found, only 256 from his library. My uncle put a note on them saying how he received them and sent the books to the Library of Haifa where they found their eternal shelter. The translation of the note says, “These books are remains of a big library of Menahem Zev Polotsky (rest in peace), From Riga, Latvia”. The Coordinator of the Department of Education for the Jewish people in Latvia, who gave himself to the precious work in the field of education by teaching the Hebrew language and culture, lost his life during the Holocaust. He, his wife Rachel, his son Amiel and his daughter Riva were killed by local Nationalists during World War II. His library was ransacked and the remains were sent to Haifa to his relatives, who in their turn gave them to the Library of the University of Haifa in remembrance of those whom we lost”.