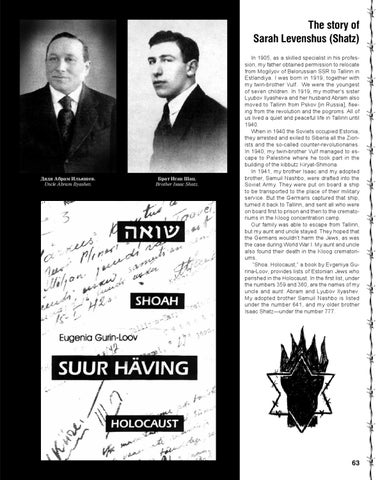 The story of Sarah Levenshus (Shatz)

In 1905, as a skilled specialist in his profession, my father obtained permission to relocate from Mogilyov of Belorussian SSR to Tallinn in Estlandiya. I was born in 1919, together with my twin-brother Vulf. We were the youngest of seven children. In 1919, my mother’s sister Lyubov Ilyasheva and her husband Abram also moved to Tallinn from Pskov [in Russia], fleeing from the revolution and the pogroms. All of us lived a quiet and peaceful life in Tallinn until 1940. When in 1940 the Soviets occupied Estonia, they arrested and exiled to Siberia all the Zionists and the so-called counter-revolutionaries. In 1940, my twin-brother Vulf managed to escape to Palestine where he took part in the building of the kibbutz Kiryat-Shmona. In 1941, my brother Isaac and my adopted brother, Samuil Nashbo, were drafted into the Soviet Army. They were put on board a ship to be transported to the place of their military service. But the Germans captured that ship, turned it back to Tallinn, and sent all who were on board first to prison and then to the crematoriums in the Kloog concentration camp. Our family was able to escape from Tallinn, but my aunt and uncle stayed. They hoped that the Germans wouldn’t harm the Jews, as was the case during World War I. My aunt and uncle also found their death in the Kloog crematoriums. “Shoa. Holocaust,” a book by Evgeniya Gurina-Loov, provides lists of Estonian Jews who perished in the Holocaust. In the first list, under the numbers 359 and 360, are the names of my uncle and aunt: Abram and Lyubov Ilyashev. My adopted brother Samuil Nashbo is listed under the number 641, and my older brother Isaac Shatz—under the number 777. .