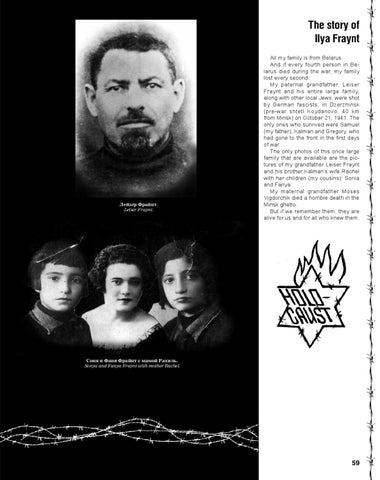 The story of Ilya Fraynt

All my family is from Belarus. And if every fourth person in Belarus died during the war, my family lost every second. My paternal grandfather, Leiser Fraynt and his entire large family, along with other local Jews, were shot by German fascists, in Dzerzhinsk (pre-war shtetl Koydanovo, 40 km from Minsk) on October 21, 1941. The only ones who survived were Samuel (my father), Kalman and Gregory, who had gone to the front in the first days of war. The only photos of this once large family that are available are the pictures of my grandfather Leiser Fraynt and his brother Kalman’s wife Rachel with her children (my cousins): Sonia and Fanya. My maternal grandfather Moses Vigdorchik died a horrible death in the Minsk ghetto. But if we remember them, they are alive for us and for all who knew them.