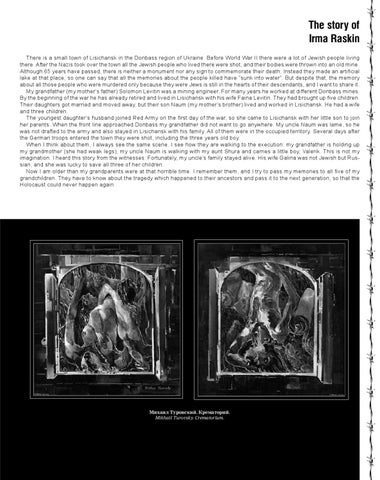 The story of Irma Raskin There is a small town of Lisichansk in the Donbass region of Ukraine. Before World War II there were a lot of Jewish people living there. After the Nazis took over the town all the Jewish people who lived there were shot, and their bodies were thrown into an old mine. Although 65 years have passed, there is neither a monument nor any sign to commemorate their death. Instead they made an artificial lake at that place, so one can say that all the memories about the people killed have “sunk into water”. But despite that, the memory about all those people who were murdered only because they were Jews is still in the hearts of their descendants, and I want to share it. My grandfather (my mother’s father) Solomon Levitin was a mining engineer. For many years he worked at different Donbass mines. By the beginning of the war he has already retired and lived in Lisichansk with his wife Faina Levitin. They had brought up five children. Their daughters got married and moved away, but their son Naum (my mother’s brother) lived and worked in Lisichansk. He had a wife and three children. The youngest daughter’s husband joined Red Army on the first day of the war, so she came to Lisichansk with her little son to join her parents. When the front line approached Donbass my grandfather did not want to go anywhere. My uncle Naum was lame, so he was not drafted to the army and also stayed in Lisichansk with his family. All of them were in the occupied territory. Several days after the German troops entered the town they were shot, including the three years old boy. When I think about them, I always see the same scene. I see how they are walking to the execution: my grandfather is holding up my grandmother (she had weak legs), my uncle Naum is walking with my aunt Shura and carries a little boy, Valerik. This is not my imagination. I heard this story from the witnesses. Fortunately, my uncle’s family stayed alive. His wife Galina was not Jewish but Russian, and she was lucky to save all three of her children. Now I am older than my grandparents were at that horrible time. I remember them, and I try to pass my memories to all five of my grandchildren. They have to know about the tragedy which happened to their ancestors and pass it to the next generation, so that the Holocaust could never happen again.