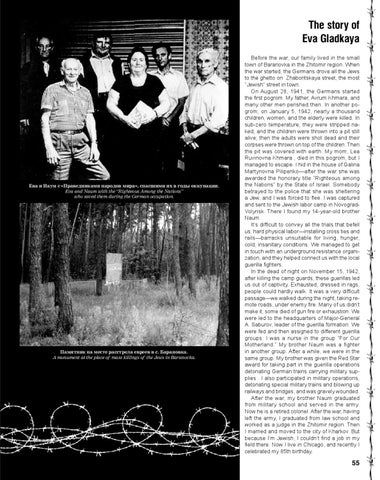 The story of Eva Gladkaya

Ева и Наум с «Праведниками народов мира», спасшими их в годы оккупации. Eva and Naum with the “Righteous Among the Nations” who saved them during the German occupation.

Before the war, our family lived in the small town of Baranovka in the Zhitomir region. When the war started, the Germans drove all the Jews to the ghetto on Zhaboritskaya street, the most “Jewish” street in town. On August 28, 1941, the Germans started the first pogrom. My father, Avrum Khmara, and many other men perished then. In another pogrom, on January 5, 1942, nearly a thousand children, women, and the elderly were killed. In sub-zero temperature, they were stripped naked, and the children were thrown into a pit still alive; then the adults were shot dead and their corpses were thrown on top of the children. Then the pit was covered with earth. My mom, Lea Ruvinovna Khmara , died in this pogrom, but I managed to escape. I hid in the house of Galina Martynovna Pilipenko—after the war she was awarded the honorary title “Righteous among the Nations” by the State of Israel. Somebody betrayed to the police that she was sheltering a Jew, and I was forced to flee. I was captured and sent to the Jewish labor camp in NovogradVolynsk. There I found my 14-year-old brother Naum . It’s difficult to convey all the trials that befell us: hard physical labor—installing cross ties and rails—barracks unsuitable for living, hunger, cold, insanitary conditions. We managed to get in touch with an underground resistance organization, and they helped connect us with the local guerilla fighters. In the dead of night on November 15, 1942, after killing the camp guards, these guerillas led us out of captivity. Exhausted, dressed in rags, people could hardly walk. It was a very difficult passage—we walked during the night, taking remote roads, under enemy fire. Many of us didn’t make it; some died of gun fire or exhaustion. We were led to the headquarters of Major-General A. Saburov, leader of the guerilla formation. We were fed and then assigned to different guerilla groups. I was a nurse in the group “For Our Motherland.” My brother Naum was a fighter in another group. After a while, we were in the same group. My brother was given the Red Star award for taking part in the guerilla operations detonating German trains carrying military supplies . I also participated in military operations, detonating special military trains and blowing up railways and bridges, and was gravely wounded. After the war, my brother Naum graduated from military school and served in the army. Now he is a retired colonel. After the war, having left the army, I graduated from law school and worked as a judge in the Zhitomir region. Then I married and moved to the city of Kharkov. But because I’m Jewish, I couldn’t find a job in my field there. Now I live in Chicago, and recently I celebrated my 85th birthday.