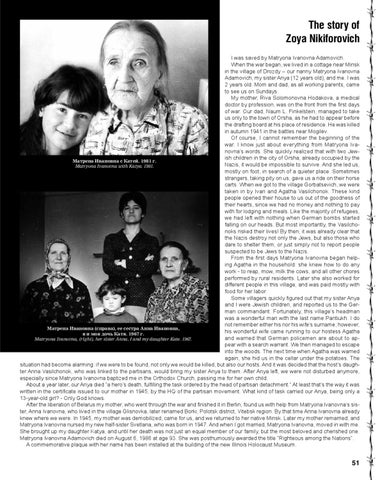 The story of Zoya Nikiforovich I was saved by Matryona Ivanovna Adamovich. When the war began, we lived in a cottage near Minsk in the village of Drozdy – our nanny Matryona Ivanovna Adamovich, my sister Anya (12 years old), and me. I was 2 years old. Mom and dad, as all working parents, came to see us on Sundays. My mother, Riva Solomonovna Hodakova, a medical doctor by profession, was on the front from the first days of war. Our dad, Naum L. Finkelstein, managed to take us only to the town of Orsha, as he had to appear before the drafting board at his place of residence. He was killed in autumn 1941 in the battles near Mogilev. Of course, I cannot remember the beginning of the war. I know just about everything from Matryona Ivanovna’s words. She quickly realized that with two Jewish children in the city of Orsha, already occupied by the Матрена Ивановна с Катей. 1981 г. Nazis, it would be impossible to survive. And she led us, Matryona Ivanovna with Katya. 1981. mostly on foot, in search of a quieter place. Sometimes strangers, taking pity on us, gave us a ride on their horse carts. When we got to the village Gorbatsevich, we were taken in by Ivan and Agatha Vasilchonok. These kind people opened their house to us out of the goodness of their hearts, since we had no money and nothing to pay with for lodging and meals. Like the majority of refugees, we had left with nothing when German bombs started falling on our heads. But most importantly, the Vasilchonoks risked their lives! By then, it was already clear that the Nazis destroy not only the Jews, but also those who dare to shelter them, or just simply not to report people suspected to be Jews to the Nazis. From the first days Matryona Ivanovna began helping Agatha in the household: she knew how to do any work - to reap, mow, milk the cows, and all other chores performed by rural residents. Later she also worked for different people in this village, and was paid mostly with food for her labor. Some villagers quickly figured out that my sister Anya and I were Jewish children, and reported us to the German commandant. Fortunately, this village’s headman was a wonderful man with the last name Pantiukh. I do not remember either his nor his wife’s surname; however, Матрена Ивановна (справа), ее сестра Анна Ивановна, his wonderful wife came running to our hostess Agatha я и моя дочь Катя. 1967 г. and warned that German policemen are about to apMatryona Ivanovna, (right), her sister Anna, I and my daughter Kate. 1967. pear with a search warrant. We then managed to escape into the woods. The next time when Agatha was warned again, she hid us in the cellar under the potatoes. The situation had become alarming: if we were to be found, not only we would be killed, but also our hosts. And it was decided that the host’s daughter Anna Vasilchonok, who was linked to the partisans, would bring my sister Anya to them. After Anya left, we were not disturbed anymore, especially since Matryona Ivanovna baptized me in the Orthodox Church, passing me for her own child. About a year later, our Anya died “a hero’s death, fulfilling the task ordered by the head of partisan detachment.” At least that’s the way it was written in the certificate issued to our mother in 1945, by the HQ of the partisan movement. What kind of task carried our Anya, being only a 13-year-old girl? - Only God knows. After the liberation of Belarus my mother, who went through the war and finished it in Berlin, found us with help from Matryona Ivanovna’s sister, Anna Ivanovna, who lived in the village Glisnovka, later renamed Borki, Polotsk district, Vitebsk region. By that time Anna Ivanovna already knew where we were. In 1945, my mother was demobilized, came for us, and we returned to her native Minsk. Later my mother remarried, and Matryona Ivanovna nursed my new half-sister Svetlana, who was born in 1947. And when I got married, Matryona Ivanovna, moved in with me. She brought up my daughter Katya, and until her death was not just an equal member of our family, but the most beloved and cherished one. Matryona Ivanovna Adamovich died on August 6, 1986 at age 93. She was posthumously awarded the title “Righteous among the Nations”. A commemorative plaque with her name has been installed at the building of the new Illinois Holocaust Museum.