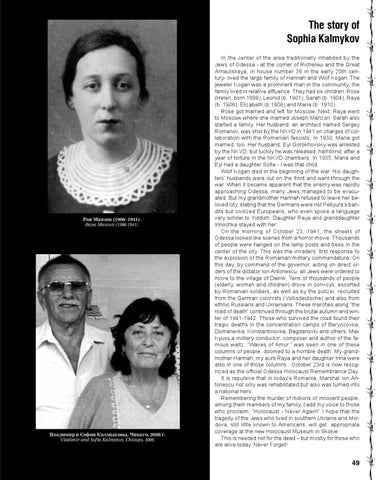 The story of Sophia Kalmykov

In the center of the area traditionally inhabited by the Jews of Odessa - at the corner of Richelieu and the Great Arnautskaya, in house number 36 in the early 20th century- lived the large family of Hannah and Wolf Kogan. The jeweler Kogan was a prominent man in the community; the family lived in relative affluence. They had six children: Rose (Helen, born 1899), Leonid (b. 1901), Sarah (b. 1904), Raya (b. 1906), Elizabeth (b.1908) and Maria (b. 1910). Rose got married and left for Moscow. Next, Raya went to Moscow where she married Joseph Manzon. Sarah also started a family. Her husband, an architect named Sergey Romanov, was shot by the NKVD in 1941 on charges of collaboration with the Romanian fascists. In 1930, Maria got married, too. Her husband, Eyl Gorokhovskiy was arrested by the NKVD, but luckily he was released, half-blind, after a year of torture in the NKVD chambers. In 1935, Maria and Eyl had a daughter Sofia - I was that child. Wolf Kogan died in the beginning of the war. His daughters’ husbands were out on the front and went through the war. When it became apparent that the enemy was rapidly approaching Odessa, many Jews managed to be evacuated. But my grandmother Hannah refused to leave her beloved city, stating that the Germans were not Petlyura’s bandits but civilized Europeans, who even spoke a language very similar to Yiddish. Daughter Raya and granddaughter Innochka stayed with her. On the morning of October 23, 1941, the streets of Odessa looked like scenes from a horror movie. Thousands of people were hanged on the lamp posts and trees in the center of the city. This was the invaders’ first response to the explosion of the Romanian military commendatura. On this day, by command of the governor, acting on direct orders of the dictator Ion Antonescu, all Jews were ordered to move to the village of Dalnik. Tens of thousands of people (elderly, women and children) drove in convoys, escorted by Romanian soldiers, as well as by the polizei, recruited from the German colonists (Volksdeutsche) and also from ethnic Russians and Ukrainians. These marches along “the road of death” continued through the brutal autumn and winter of 1941-1942. Those who survived the road found their tragic deaths in the concentration camps of Beryozovka, Domanevka, Konstantinovka, Bagdanovki and others. Max Kyuss,a military conductor, composer and author of the famous waltz, “Waves of Amur,” was seen in one of these columns of people, doomed to a horrible death. My grandmother Hannah, my aunt Raya and her daughter Inna were also in one of those columns . October 23rd is now recognized as the official Odessa Holocaust Remembrance Day. It is repulsive that in today’s Romania, Marshal Ion Antonescu not only was rehabilitated,but also was turned into a national hero. Remembering the murder of millions of innocent people, among them members of my family, I add my voice to those who proclaim: “Holocaust - Never Again!” I hope that the tragedy of the Jews who lived in southern Ukraine and Moldova, still little known to Americans, will get appropriate coverage at the new Holocaust Museum in Skokie. This is needed not for the dead – but mostly for those who are alive today. Never Forget!