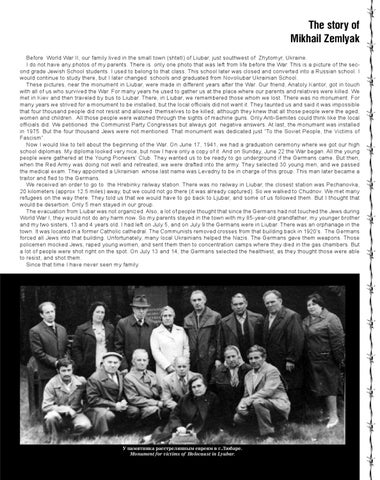 The story of Mikhail Zemlyak Before World War II, our family lived in the small town (shtetl) of Liubar, just southwest of Zhytomyr, Ukraine. I do not have any photos of my parents. There is only one photo that was left from life before the War. This is a picture of the second grade Jewish School students. I used to belong to that class. This school later was closed and converted into a Russian school. I would continue to study there, but I later changed schools and graduated from Novoliubar Ukrainian School. These pictures, near the monument in Liubar, were made in different years after the War. Our friend, Anatoly Kantor, got in touch with all of us who survived the War. For many years he used to gather us at the place where our parents and relatives were killed. We met in Kiev and then traveled by bus to Liubar. There, in Liubar, we remembered those whom we lost. There was no monument. For many years we strived for a monument to be installed, but the local officials did not want it. They taunted us and said it was impossible that four thousand people did not resist and allowed themselves to be killed, although they knew that all those people were the aged, women and children. All those people were watched through the sights of machine guns. Only Anti-Semites could think like the local officials did. We petitioned the Communist Party Congresses but always got negative answers. At last, the monument was installed in 1975. But the four thousand Jews were not mentioned. That monument was dedicated just “To the Soviet People, the Victims of Fascism”. Now I would like to tell about the beginning of the War. On June 17, 1941, we had a graduation ceremony where we got our high school diplomas. My diploma looked very nice, but now I have only a copy of it. And on Sunday, June 22 the War began. All the young people were gathered at the Young Pioneers’ Club. They wanted us to be ready to go underground if the Germans came. But then, when the Red Army was doing not well and retreated, we were drafted into the army. They selected 30 young men, and we passed the medical exam. They appointed a Ukrainian whose last name was Levadny to be in charge of this group. This man later became a traitor and fled to the Germans. We received an order to go to the Hrebinky railway station. There was no railway in Liubar, the closest station was Pechanovka, 20 kilometers (approx 12.5 miles) away, but we could not go there (it was already captured). So we walked to Chudnov. We met many refugees on the way there. They told us that we would have to go back to Ljubar, and some of us followed them. But I thought that would be desertion. Only 5 men stayed in our group. The evacuation from Liubar was not organized. Also, a lot of people thought that since the Germans had not touched the Jews during World War I, they would not do any harm now. So my parents stayed in the town with my 85-year-old grandfather, my younger brother and my two sisters, 13 and 4 years old. I had left on July 5, and on July 9 the Germans were in Liubar. There was an orphanage in the town. It was located in a former Catholic cathedral. The Communists removed crosses from that building back in 1920’s. The Germans forced all Jews into that building. Unfortunately, many local Ukrainians helped the Nazis. The Germans gave them weapons. Those policemen mocked Jews, raped young women, and sent them then to concentration camps where they died in the gas chambers. But a lot of people were shot right on the spot. On July 13 and 14, the Germans selected the healthiest, as they thought those were able to resist, and shot them. Since that time I have never seen my family.