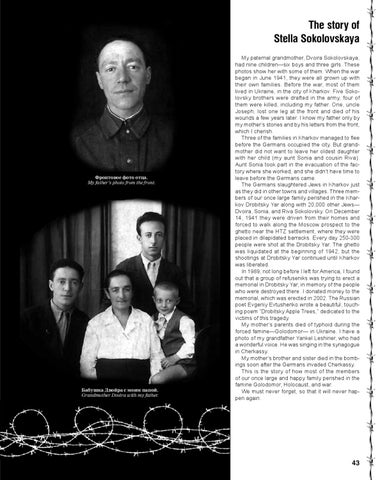 The story of Stella Sokolovskaya

Фронтовое фото отца. My father’s photo from the front.

My paternal grandmother, Dvoira Sokolovskaya, had nine children—six boys and three girls. These photos show her with some of them. When the war began in June 1941, they were all grown up with their own families. Before the war, most of them lived in Ukraine, in the city of Kharkov. Five Sokolovsky brothers were drafted in the army, four of them were killed, including my father. One, uncle Joseph, lost one leg at the front and died of his wounds a few years later. I know my father only by my mother’s stories and by his letters from the front, which I cherish. Three of the families in Kharkov managed to flee before the Germans occupied the city. But grandmother did not want to leave her oldest daughter with her child (my aunt Sonia and cousin Riva). Aunt Sonia took part in the evacuation of the factory where she worked, and she didn’t have time to leave before the Germans came. The Germans slaughtered Jews in Kharkov just as they did in other towns and villages. Three members of our once large family perished in the Kharkov Drobitsky Yar along with 20,000 other Jews— Dvoira, Sonia, and Riva Sokolovsky. On December 14, 1941 they were driven from their homes and forced to walk along the Moscow prospect to the ghetto near the HTZ settlement, where they were placed in dilapidated barracks. Every day 250-300 people were shot at the Drobitsky Yar. The ghetto was liquidated at the beginning of 1942, but the shootings at Drobitsky Yar continued until Kharkov was liberated. In 1989, not long before I left for America, I found out that a group of refuseniks was trying to erect a memorial in Drobitsky Yar, in memory of the people who were destroyed there. I donated money to the memorial, which was erected in 2002. The Russian poet Evgeniy Evtushenko wrote a beautiful, touching poem “Drobitsky Apple Trees,” dedicated to the victims of this tragedy. My mother’s parents died of typhoid during the forced famine—Golodomor— in Ukraine. I have a photo of my grandfather Yankel Leshiner, who had a wonderful voice. He was singing in the synagogue in Cherkassy. My mother’s brother and sister died in the bombings soon after the Germans invaded Cherkassy. This is the story of how most of the members of our once large and happy family perished in the famine Golodomor, Holocaust, and war. We must never forget, so that it will never happen again.