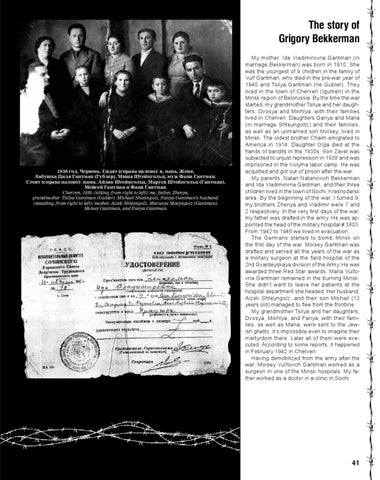 The story of Grigory Bekkerman

My mother, Ida Vladimirovna Gantman (in marriage Bekkerman) was born in 1910. She was the youngest of 9 children in the family of Vulf Gantman, who died in the pre-war year of 1940 and Tsilya Gantman (ne Gubler). They lived in the town of Cherven (Igumen) in the Minsk region of Belorussia. By the time the war started, my grandmother Tsilya and her daughters, Dvosya and Mikhlya, with their families lived in Cherven. Daughters Ganya and Maria (in marriage Shteyngoltz) and their families, as well as an unmarried son Moisey, lived in Minsk. The oldest brother Chaim emigrated to America in 1914. Daughter Olga died at the hands of bandits in the 1930s. Son Zavel was subjected to unjust repression in 1938 and was imprisoned in the Kolyma labor camp. He was acquitted and got out of prison after the war. My parents, Natan Natanovich Bekkerman and Ida Vladimirivna Gantman, and their three children lived in the town of Sochi, Krasnodarsk area. By the beginning of the war, I turned 9; my brothers Zhenya and Vladimir were 7 and 2 respectively. In the very first days of the war, my father was drafted in the army. He was appointed the head of the military hospital # 3803. From 1942 to 1946 we lived in evacuation. The Germans started to bomb Minsk on the first day of the war. Moisey Gantman was drafted and served all the years of the war as a military surgeon at the field hospital of the 2nd Gvardeyskaya division of the Army. He was awarded three Red Star awards. Maria Vulfovna Gantman remained in the burning Minsk. She didn’t want to leave her patients at the hospital department she headed. Her husband, Aizek Shteyngolz, and their son Mikhail (13 years old) managed to flee from the frontline. My grandmother Tsilya and her daughters, Dvosya, Mikhlya, and Fanya, with their families, as well as Maria, were sent to the Jewish ghetto. It’s impossible even to imagine their martyrdom there. Later all of them were executed. According to some reports, it happened in February 1942 in Cherven. Having demobilized from the army after the war, Moisey Vulfovich Gantman worked as a surgeon in one of the Minsk hospitals. My father worked as a doctor in a clinic in Sochi.