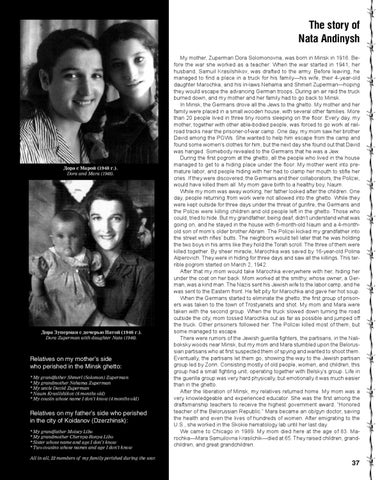 The story of Nata Andinysh

My mother, Zuperman Dora Solomonovna, was born in Minsk in 1916. Before the war she worked as a teacher. When the war started in 1941, her husband, Samuil Krasilshikov, was drafted to the army. Before leaving, he managed to find a place in a truck for his family—his wife, their 4-year-old daughter Marochka, and his in-laws Nehama and Shmerl Zuperman—hoping they would escape the advancing German troops. During an air raid the truck burned down, and my mother and her family had to go back to Minsk. In Minsk, the Germans drove all the Jews to the ghetto. My mother and her family were placed in a small wooden house, with several other families. More than 20 people lived in three tiny rooms sleeping on the floor. Every day, my mother, together with other able-bodied people, was forced to go work at railroad tracks near the prisoner-of-war camp. One day, my mom saw her brother David among the POWs. She wanted to help him escape from the camp and found some women’s clothes for him, but the next day she found out that David was hanged. Somebody revealed to the Germans that he was a Jew. During the first pogrom at the ghetto, all the people who lived in the house managed to get to a hiding place under the floor. My mother went into premature labor, and people hiding with her had to clamp her mouth to stifle her cries. If they were discovered, the Germans and their collaborators, the Polizei, would have killed them all. My mom gave birth to a healthy boy, Naum. While my mom was away working, her father looked after the children. One day, people returning from work were not allowed into the ghetto. While they were kept outside for three days under the threat of gunfire, the Germans and the Polizei were killing children and old people left in the ghetto. Those who could, tried to hide. But my grandfather, being deaf, didn’t understand what was going on, and he stayed in the house with 6-month-old Naum and a 4-monthold son of mom’s older brother Abram. The Polizei kicked my grandfather into the street with rifles’ butts. The neighbors would tell later that he was holding the two boys in his arms like they hold the Torah scroll. The three of them were killed together. By sheer miracle, Marochka was saved by 16-year-old Polina Alperovich. They were in hiding for three days and saw all the killings. This terrible pogrom started on March 2, 1942. After that my mom would take Marochka everywhere with her, hiding her under the coat on her back. Mom worked at the smithy, whose owner, a German, was a kind man. The Nazis sent his Jewish wife to the labor camp, and he was sent to the Eastern front. He felt pity for Marochka and gave her hot soup. When the Germans started to eliminate the ghetto, the first group of prisoners was taken to the town of Trostyanets and shot. My mom and Mara were taken with the second group. When the truck slowed down turning the road outside the city, mom tossed Marochka out as far as possible and jumped off the truck. Other prisoners followed her. The Polizei killed most of them, but some managed to escape. There were rumors of the Jewish guerilla fighters, the partisans, in the Naliboksky woods near Minsk, but my mom and Mara stumbled upon the Belorussian partisans who at first suspected them of spying and wanted to shoot them. Eventually, the partisans let them go, showing the way to the Jewish partisan group led by Zorin. Consisting mostly of old people, women, and children, this group had a small fighting unit, operating together with Belsky’s group. Life in the guerilla group was very hard physically, but emotionally it was much easier than in the ghetto. After the liberation of Minsk, my relatives returned home. My mom was a very knowledgeable and experienced educator. She was the first among the draftsmanship teachers to receive the highest government award, “Honored teacher of the Belorussian Republic.” Mara became an ob/gyn doctor, saving the health and even the lives of hundreds of women. After emigrating to the U.S., she worked in the Skokie hematology lab until her last day. We came to Chicago in 1989. My mom died here at the age of 83. Marochka—Mara Samuilovna Krasilchik—died at 65. They raised children, grandchildren, and great grandchildren.