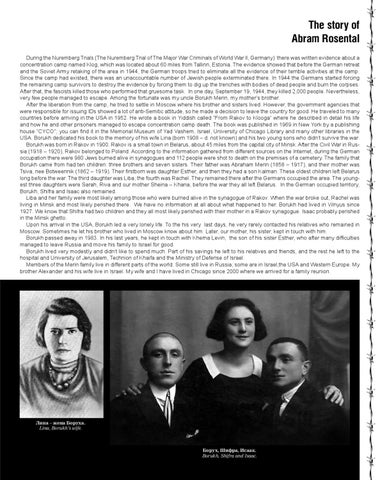 The story of Abram Rosental During the Nuremberg Trials (The Nuremberg Trial of The Major War Criminals of World War ll, Germany) there was written evidence about a concentration camp named Klog, which was located about 60 miles from Tallinn, Estonia. The evidence showed that before the German retreat and the Soviet Army retaking of the area in 1944, the German troops tried to eliminate all the evidence of their terrible activities at the camp. Since the camp had existed, there was an unaccountable number of Jewish people exterminated there. In 1944 the Germans started forcing the remaining camp survivors to destroy the evidence by forcing them to dig up the trenches with bodies of dead people and burn the corpses. After that, the fascists killed those who performed that gruesome task. In one day, September 19, 1944, they killed 2,000 people. Nevertheless, very few people managed to escape. Among the fortunate was my uncle Borukh Merin, my mother’s brother. After the liberation from the camp, he tried to settle in Moscow where his brother and sisters lived. However, the government agencies that were responsible for issuing IDs showed a lot of anti-Semitic attitude, so he made a decision to leave the country for good. He traveled to many countries before arriving in the USA in 1952. He wrote a book in Yiddish called “From Rakov to Klooga” where he described in detail his life and how he and other prisoners managed to escape concentration camp death. The book was published in 1969 in New York by a publishing house “CYCO”; you can find it in the Memorial Museum of Yad Vashem, Israel, University of Chicago Library and many other libraries in the USA. Borukh dedicated his book to the memory of his wife Lina (born 1908 – d. not known) and his two young sons who didn’t survive the war. Borukh was born in Rakov in 1900. Rakov is a small town in Belarus, about 45 miles from the capital city of Minsk. After the Civil War in Russia (1918 – 1920), Rakov belonged to Poland. According to the information gathered from different sources on the Internet, during the German occupation there were 980 Jews burned alive in synagogues and 112 people were shot to death on the premises of a cemetery. The family that Borukh came from had ten children: three brothers and seven sisters. Their father was Abraham Merin (1858 – 1917), and their mother was Tsiva, nee Botweennik (1862 – 1919). Their firstborn was daughter Esther, and then they had a son Kalman. These oldest children left Belarus long before the war. The third daughter was Liba; the fourth was Rachel. They remained there after the Germans occupied the area. The youngest three daughters were Sarah, Riva and our mother Sheina – Khana; before the war they all left Belarus. In the German occupied territory, Borukh, Shifra and Isaac also remained. Liba and her family were most likely among those who were burned alive in the synagogue of Rakov. When the war broke out, Rachel was living in Minsk and most likely perished there. We have no information at all about what happened to her. Borukh had lived in Vilnyus since 1927. We know that Shifra had two children and they all most likely perished with their mother in a Rakov synagogue. Isaac probably perished in the Minsk ghetto. Upon his arrival in the USA, Borukh led a very lonely life. To the his very last days, he very rarely contacted his relatives who remained in Moscow. Sometimes he let his brother who lived in Moscow know about him. Later, our mother, his sister, kept in touch with him. Borukh passed away in 1983. In his last years, he kept in touch with Khema Levin, the son of his sister Esther, who after many difficulties managed to leave Russia and move his family to Israel for good. Borukh lived very modestly and didn’t like to spend much. Part of his savings he left to his relatives and friends, and the rest he left to the hospital and University of Jerusalem, Technion of Khaifa and the Ministry of Defense of Israel. Members of the Merin family live in different parts of the world. Some still live in Russia; some are in Israel,the USA and Western Europe. My brother Alexander and his wife live in Israel. My wife and I have lived in Chicago since 2000 where we arrived for a family reunion.