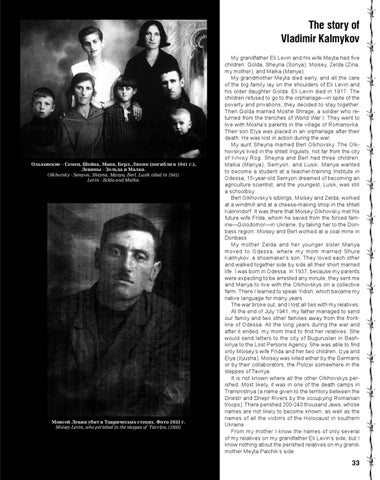 The story of Vladimir Kalmykov

My grandfather Eli Levin and his wife Meyta had five children: Golda, Sheyna (Sonya), Moisey, Zelda (Zina, my mother), and Malka (Manya). My grandmother Meyta died early, and all the care of the big family lay on the shoulders of Eli Levin and his older daughter Golda. Eli Levin died in 1917. The children refused to go to the orphanage—in spite of the poverty and privations, they decided to stay together. Then Golda married Moshe Shrage, a soldier who returned from the trenches of World War I. They went to live with Moshe’s parents in the village of Romanovka. Their son Elya was placed in an orphanage after their death. He was lost in action during the war. My aunt Sheyna married Berl Olkhovsky. The Olkhovskys lived in the shtetl Ingulets, not far from the city of Krivoy Rog. Sheyna and Berl had three children: Malka (Manya), Semyon, and Lusik. Manya wanted to become a student at a teacher-training Institute in Odessa, 15-year-old Semyon dreamed of becoming an agriculture scientist, and the youngest, Lusik, was still a schoolboy. Berl Olkhovsky’s siblings, Moisey and Zelda, worked at a windmill and at a cheese-making shop in the shtetl Kalinindorf. It was there that Moisey Olkhovsky met his future wife Frida, whom he saved from the forced famine—Golodomor—in Ukraine, by taking her to the Donbass region. Moisey and Berl worked at a coal mine in Donbass. My mother Zelda and her younger sister Manya moved to Odessa, where my mom married Shura Kalmykov, a shoemaker’s son. They loved each other and walked together side by side all their short married life. I was born in Odessa. In 1937, because my parents were expecting to be arrested any minute, they sent me and Manya to live with the Olkhovskys on a collective farm. There I learned to speak Yidish, which became my native language for many years. The war broke out, and I lost all ties with my relatives. At the end of July 1941, my father managed to send our family and two other families away from the frontline of Odessa. All the long years during the war and after it ended, my mom tried to find her relatives. She would send letters to the city of Buguruslan in Bashkiriya to the Lost Persons Agency. She was able to find only Moisey’s wife Frida and her two children, Izya and Elya (Ilyusha). Moisey was killed either by the Germans or by their collaborators, the Polizei somewhere in the steppes of Tavriya. It is not known where all the other Olkhovskys perished. Most likely, it was in one of the death camps in Transnistriya (a name given to the territory between the Dnestr and Dnepr Rivers by the occupying Romanian troops). There perished 200-240 thousand Jews, whose names are not likely to become known, as well as the names of all the victims of the Holocaust in southern Ukraine. From my mother I know the names of only several of my relatives on my grandfather Eli Levin’s side, but I know nothing about the perished relatives on my grandmother Meyta Palchik’s side.